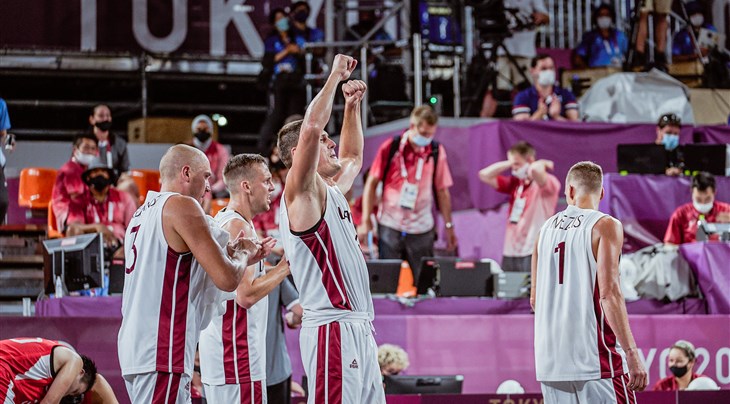 TOKYO (Japan) - Dreams continued - while some shattered - during a dramatic penultimate day of the 3x3 Tokyo Olympics competition, where half of the 16 men's and women's teams said farewell.

After four days of intense and entertaining action, the semi-finals have been determined with No.1 seed Serbia playing Russian Olympic Committee (ROC) and Latvia pitted against Belgium in the men's.

The women's bracket is highlighted by a blockbuster between USA and France, while China and ROC square off .

Let's take a closer look at day three, where the final stretch of pool play was concluded followed by the quarter-finals with ROC knocking out Netherlands and Latvia taking down host Japan in men's, while in the women's bracket China easily beat Italy and France survived a furious rally from Japan to win 16-14.

FIBA 3x3 World Cup 2019 bronze medalist Poland and China packed their bags early after falling at the pool stage, while Romania and winless Mongolia were the casualties in the women.

Medal fancies Latvia were patchy at stages during the pool stage but found their best on day four. They firstly denied Netherlands an automatic semi-final spot with a tense victory due largely to scorching hot two-point shooting.

And they brought that same heat to a high-quality quarter-final against Japan, where Latvia prevailed 21-18 in an instant classic.

Everyone knows about superhero duo Karlis Lasmanis and Nauris Miezis but Latvia will be most encouraged by the return to form of sharpshooter Edgars Krumins, who led them with a game-high 9 points against Japan.

Latvia will be feeling confident ahead of the biggest day of their life.

The No.1 seed were the disappointments of the tournament after the opening two days where they were just 1-3. But France steadily built form with three straight wins to end the pool stage before finding their best in a tense quarter-final to down a gritty Japan.

Their turnaround has been sparked by superstars Laetitia Guapo and Migna Toure shaking off slow stars to add much needed firepower for a France team who in the earlier games were reliant on the wizardy of Marie-Eve Paget for buckets.

France are back to their brilliant best and will need to even go to a higher level in the semi-final against USA.

Belgium sharpshooter Thibaut Vervoort probably should be competing in the shooting events at the Olympics.

We're glad he's not because Vervoort has emerged as the ultimate 3x3 sniper after he hit his third two-point buzzer beater in the pool stage with a shot for the ages to sink Poland.

After earlier miracles against Latvia and Netherlands, Vervoort hit an insane off balanced two from near the logo in surely one of the greatest shots in 3x3 history.

More importantly he sealed Belgium a spot in the quarters. How does he do this? Maybe his headband gives him superpowers?

China were largely written off heading into Tokyo because of key absences but their replacements have done the job, including Wang Lili who has been one of the stars of the tournament.

The dynamic Lili was unstoppable and tapped into her bag of tricks during a sizzling quarter-final against Italy, where she poured in 11 points.

If she can reproduce that in the semis then China will surely be headed for a podium finish.

USA had rolled through the opening three days but host Japan were not intimidated.

They trailed for much of the contest and twice by five points before launching a spectacular comeback to rattle USA, who had already secured a semi-final berth after six straight wins to start the Olympics.

A gritty Japan did the almost impossible and locked up USA's firepower before Mio Shinozaki hit a huge two-pointer down the stretch as the host hung on for a historic upset.

It might have been a dead rubber for them but USA are no longer unbeatable.