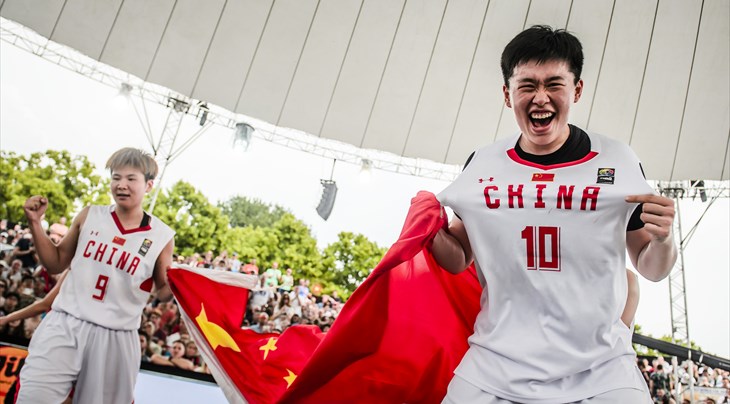 The Asian powerhouse automatically qualified for the Olympics in both men's and women's due to high rankings but coveted spots to Tokyo have been fiercely fought over.

The men's team is led by their No.1 player Haonan Li who collected the MVP in China's gold medal winning at the FIBA 3x3 U18 Asia 2017.

The 6ft 6in (1.98m) athletic marvel is fundamentally flawless but he can also tap into his bag of tricks to embarrass defenders.

If he doesn't hit you then Yan Peng will with this rising star well known on the FIBA 3x3 World Tour after admirably filling in for Stefan Stojacic aka 'Mr Robot' on Liman's star-studded team in 2019.

Not even the Great Wall can stop Peng from getting to the rack when he's in full flow and his big game experience on the World Tour should benefit China, who welcome prominent CBA players Hu Jinqiu and Gao Shiyan (a CBA all-star this season) into the lineup.

The women's, however, have been hit by the injury curse with only the towering Zhang Zhiting remaining from China's memorable FIBA 3x3 World Cup 2019 title.

They've lost Wu Di and World Cup MVP Jiang Jia Yin to surgeries increasing the burden on the 6ft 5in (1.96m) tour de force who was the fourth leading scorer in Amsterdam after completely dominating the paint.

The 25-year-old will have undoubtedly a big burden but there is enough talent around her for China to still be confident of making a deep run in Tokyo.

They have young guns who will provide spark and energize this team led by 18-year-old sensation Jiyuan Wan who has starred for her country in major junior basketball tournaments, while 19-year-old Yang Shuyu has too been impressive for China in basketball youth categories. Both have excelled during a long and competitive training camp.

You just know the bright lights won't be too much for this dynamic duo.

While 28-year-old basketball star Wang Lili adds extra experience for China who might not be at full strength but can never be written off due to their remarkable line of talent.