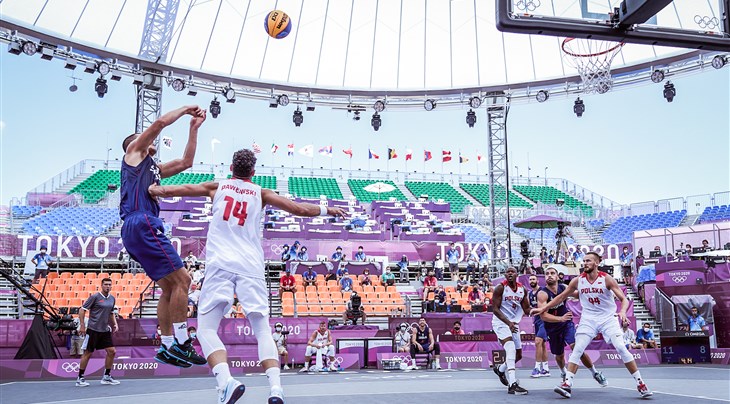 TOKYO (Japan) - No.1 seed Serbia shook off a slow start in their day two opener to record a comeback 15-12 victory over Poland and remain the only unbeaten team in the men's Olympic competition.

Serbia could not buy a bucket early before their renowned team work sparked a fightback as they wore down Poland, who split their day one games against Latvia and Japan.

The four-time World Cup champs were remarkably the only unbeaten men's team on an unforgettable day one after wins over China and Netherlands.

It was a rematch of the classic FIBA 3x3 World Cup 2019 bronze medal game, where a red-hot Michael Hicks inspired Poland to cause an upset for the ages.

But Hicks could not repeat the heroics and scored just two points as Poland went ice cold as the game wore on.

Through hard-nosed defense and offensive rebounding, Poland made a fast start and jumped out to a a 10-5 lead. Their gritty approach was highlighted by the unusual sight of Dusan Bulut being stripped leading to an easy Poland basket.

Much like against Netherlands, Bulut was well held early but started to come alive just when his team needed him. A revived Serbia showed off their trademark slick passing skills with consecutive beautiful possessions to get back into the contest.

Przemyslaw Zamojski did his best to spark Poland with a vicious two-handed dunk but buckets were ultimately too hard to find for them as they scored just two points in the last five minutes.

He was mostly well held but Bulut almost always has his moment. While he scored just 3 points, Bulut's gorgeous one-handed dime inside the paint to Mihailo Vasic was another to add to his insane collection of highlights.