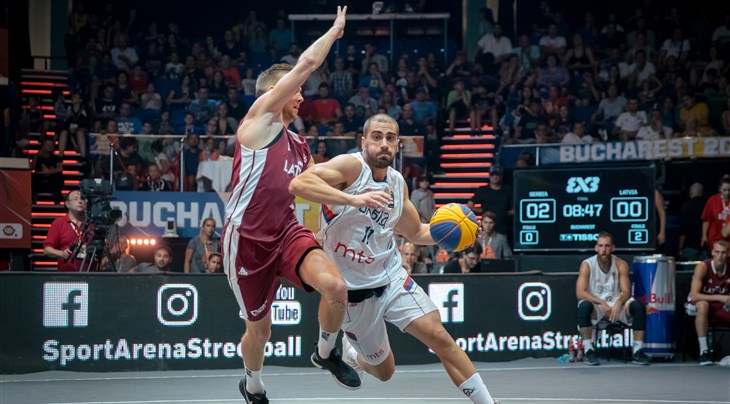 TOKYO (Japan) - Our 3x3 expert Austin Schindel comes up with his power ranking of the 8 teams going for gold in Tokyo.

1. Serbia
We haven’t seen Serbia play on the international stage since 2019, but out of pure respect for their past success, they come into the event as my top team.

We all know the recent headlines. Between the breakup of Novi Sad and the elevation of talent from across the 3x3 world, it’s popular to cast doubt on Serbia. But, the record books are littered with the most successful nation in 3x3 history.

Dusan Bulut has been waiting his entire life for this moment, and while past trophies promise nothing, we never bet against the 3x3 GOAT.

2. Latvia
You can call these guys Walter White because they know chemistry.

After Serbia, there’s no team with more high-level experience than Latvia. The fearless foursome of Nauris Miezis, Karlis Lasmanis, Edgars Krumins, and Agnis Cavars aren’t afraid of any team in the field, having won the World Tour last year (as Team Riga) and staking their claim as a top contender.

Despite limping into the Olympics, needing to win the final game at the Olympic Qualifying Tournament, there’s nowhere to hide from this 3x3 juggernaut.

3. Netherlands
International experience? Check. One of the hottest team’s in 3x3? Check. Flying dangerously under the radar? Check.

We know our clear top two favorites heading into the Tokyo games, but the team that could walk away with the gold has come seriously close to winning two 3x3 World Cup titles, in 2017 and 2018, losing both times to Serbia.

They came victorious in the only World Tour Masters this year (as Team Amsterdam Talent & Pro) and are the reason for USA's absence at the Olympics (with the men) after an amazing finish to the FIBA 3x3 Olympic Qualifier.

It’s time we put some respect on their name.

4. Poland
Michael Hicks has been a legend of Poland, sinking endless big shots, making their journey the stuff of legends. We’ve also seen what he can do on the international stage, earning a bronze medal at the FIBA 3x3 World Cup 2019.

The bigger the prize, the bigger the player. He also proved he could be a facilitator at the OQT. It's easy to forget about Poland because they haven't shined on the World Tour in the past few years but between the World Cup 2019 and the OQT... they kind of beat the top 2 teams in this Power Ranking!!!

5. Belgium
Maybe the most unlikely team in the field, Belgium is firing on all cylinders. Tested in the fire of the Olympic qualifiers, Debrecen MVP Rafael Bogaerts and crew went 7-1 over two qualifying events, putting everyone on high alert.

They earned the final spot over Hungary and their celebration showed just how much it meant to them. They enter the games with the same group of players that overcame all the odds and won 2 of the 3 Challengers in 2021 with Team Antwerp. Now it’s time to write a new chapter in history.

6. Russian Olympic Committee
Might seem low but we haven't seen much of the team since it did not have to go through the Olympic Qualifiers (they qualified based on ranking). In the end, the Russian Olympic Committee opted to go young with 4 players who won the FIBA 3x3 U23 World Cup either or both in 2018 and 2019. Just two years later, are they ready to take over the senior category? If they do, it means sharpshooter Alexander Zuev (who won MVP both years) will have been a star in Tokyo (or that Ilia Karpenkov is no longer the best-kept secret in 3x3).

7. Japan
The hosts won’t get to play with their fans cheering them on, but they certainly have the weapons to compete for a medal.

Tomoya Ochiai, the FIBA 3x3 Asia Cup 2018 bronze medalist, is ready to lead his country and provide the energy and grit that team Japan is used to.

The pressure is on for Japan, but with no travel needed and a familiar atmosphere, they might be able to pull off an upset or two.

8. China
3x3 is an unpredictable so please don't send me screenshots after China win a medal in Tokyo. Truth is though that they sent a team that lacks experience. As a matter of fact, they are the youngest team in the field (24 years old on average).

As an underdog at the event, China enter without a major international tournament win at the senior level. Haonan Li was on fire at the FIBA 3x3 U18 Asia Cup 2017 though, where he led China to gold and won MVP honors.

It will take a massive individual effort from the young gun, and what better way to introduce yourself than at the Olympic games?