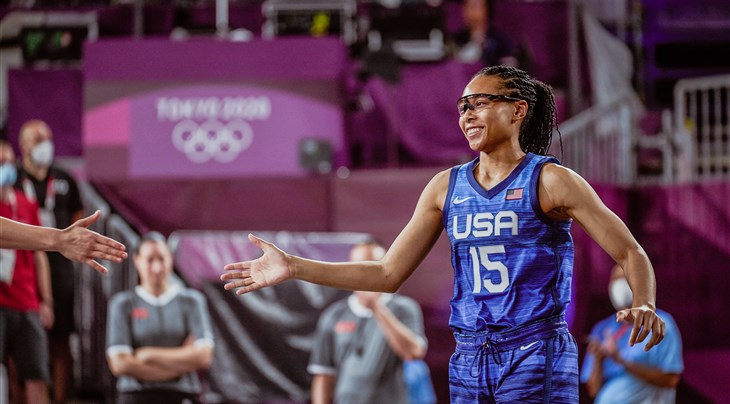 TOKYO (Japan) - Women's 3x3 favorite USA moved closer to locking up a semi-final berth after battling past a gritty Italy 17-13 on day three of Olympic action.

Unbeaten USA stretched their winning streak to five in Tokyo but were made to work against Italy as they fought off struggles from two, where they finished 0-of-7.

The defeat was a tough pill to swallow for Italy, who are 2-4 and fighting for a spot in the top 6.

🇺🇸 @usab3x3 put on a clinic on the interior as they hold off @Italbasket to move to 5⃣➖0⃣ in the Women's Pool Round!#Tokyo2020 #3x3 pic.twitter.com/mB9La8bSLI

So much of Italy's hopes rest on the shoulders of Rae Lin D'Alie, who lost her match-up with opposite number Mai Yamamoto in their earlier loss against Japan.

But 'Rae Rae' had her game face on and attacked her athletic opponents with several nice moves to get to the rim. She didn't nail all her shots but her aggressiveness set the tone and instilled confidence in Italy, who were able to defend well and rattle USA.

With sharpshooter Kelsey Plum struggling from deep, USA went inside to a reliable source - the towering Stefanie Dolson, who made buckets look easy especially when she was switched on D'Alie.

But they couldn't capitalize on that dominance because they were ice cold from deep, while Italy started heating up from range to pull within 13-12 in the dying minutes.

Plum had struggled badly from deep so she resorted to getting inside the arc and it paid dividends as she drove to the rim for a layup and then hit a classy jumper to ensure USA outlasted Italy.