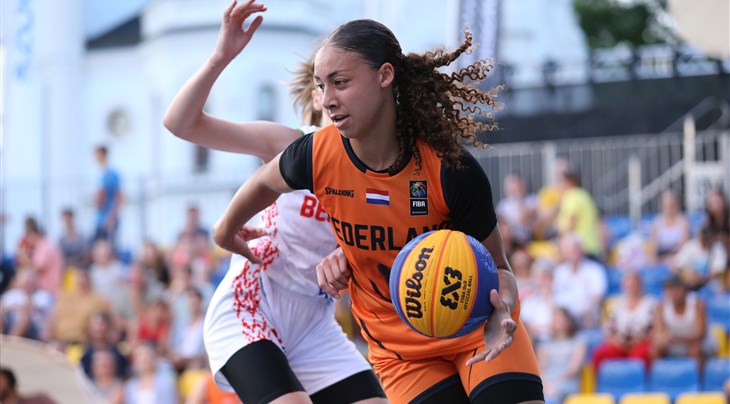 DEBRECEN (Hungary) - The FIBA 3x3 U18 World Cup 2021 is just days away and we have 20 of the best men's and women's U18 teams in the world heading to Debrecen for the biggest youth international tournament since 2019.

Back in 2019, it was a Team USA sweep, with both the men and women taking home the titles. This year, the USA returns with two strong squads despite being ranked towards the bottom of the bracket.

The stars of tomorrow are ready to shine today. Here are 10 players to keep a close eye on at the U18 World Cup 2021.

Keyonte George (USA) - This man is one of the most talented amateur players in the country. Keyonte George, the number two ranked high school player, according to ESPN.com, is heading to Baylor next year, but first, he'll go for gold at the U18 World Cup. He has all the skills and is ready to bring them to an international audience.

Kyle Filipowski (USA) - The Duke-bound big man joins George on this loaded USA squad looking to defender their title. You can expect to see him bring his inside-outside game to Debrecen and showcase his skills before he heads to play at Cameron Indoor Stadium. This will be his first time representing the USA and also his first 3x3 action; we can't wait to see what he's got.

Mārcis Osis (LAT) - Despite being 17, this guy is a 3x3 veteran. Osis has played the format since 2013 when he was only 9 years old. He has 11 3x3 event wins to his name including the Evolution Brasa 3x3 Basketball which took place this past week. This will be his biggest tournament to date for the #3 ranked U18 men's player in the world and his first chance to play for Latvia.

Róbert Ságodi (HUN) - In his first-ever 3x3 action at the FIBA 3x3 U17 Europe Cup Qualifier 2021, Robert Ságodi was the co-leading scorer over three games, with 22 points. He now heads into the U18 World Cup in just his second 3x3 event with confidence that he can fill up the score sheet.

Mintautas Mockus (LTU) - The Neptūnas-Akvaservis player is coming over to play in 3x3 for the second time in his career. The only other event was the U17 žiemos čempionatas. IV etapas in Lithuania, coming in first. The swingman is looking to propel Lithuania in his first international appearance and make the 3x3 powerhouse country proud.

Ayanna Patterson (USA) - Patterson will lead Team USA, which is trying to win their third straight FIBA 3x3 U18 World Cup title. The Indiana native is heading to UCONN, after committing to the university in March. She is listed as the No. 3 high school player in the country. This will be her first time representing her country in 3x3, but not her first action. She took part in the USA Basketball 3x3 U18 National Championships back in 2019.

Kira Rice (USA) - Kiki Rice is the 6th ranked player in the Class of 2022 and while she has not committed to a university yet, the 17-year-old is looking to make a name for herself on the world stage. Her only other 3x3 experience came at the Blue Star 30 3x3 Stripes in 2018, but since then, her game has blossomed into one of the best scoring guards in the country.

Claudia Contell (ESP) - Contrell comes into the event with a lot of high-level basketball experience as a member of Valencia Basket Club SAD. She is the second-youngest player on the team, and at 17-years-old, she makes her 3x3 debut.

Jaleesa Molina (NED) - She has been playing 3x3 since 2018, representing her country for the first time earlier this month at the FIBA 3x3 U17 Europe Cup Qualifier 2021. Molina is part of the Orange Lions Academy, the national talent program of the Dutch Basketball Association as one of the up and coming stars in the nation.

Enija Ķīvīte (LAT) - The number 6th ranked player in the U18 women's rankings will step up to lead Latvia. She most recently finished as runner-up at the FIBA 3x3 U23 Nations League 2021 - Europe 2 - Stop 5 in her first 3x3 action for the national team. At the U18 World Cup, she begins her journey in Pool C alongside Germany, Indonesia, and Israel.

Tune in to all the action live on the FIBA 3x3 YouTube and Facebook pages, from Tuesday, August 24 to Sunday, August 29.