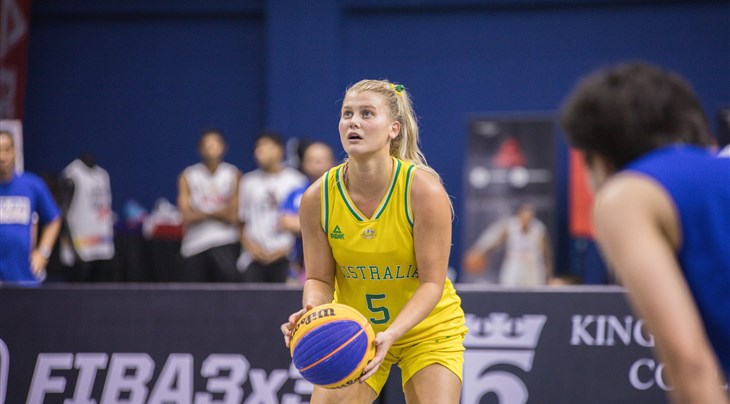 SYDNEY (Australia) – It is particularly daunting following in the footsteps of a famous parent.

Just ask teenaged 3x3 star Shyla Heal, whose father Shane is one of Australia's greatest basketball players. The four-time Olympian enjoyed a legendary career in Australia's NBL and also played in the NBA for the Minnesota Timberwolves and San Antonio Spurs, while maintaining a visible presence since retirement via coaching and media roles.

To a broader audience, the flamboyant Heal is probably best remembered for his heat check – eight 3s – against mighty USA before the 1996 Olympics and his on-court confrontation with firebrand superstar Charles Barkley.

"I've heard a lot about the Charles Barkley incident and a lot of stories of his career. He was pretty feisty,” the 18-year-old Heal says of her father.

Yes, I am aware my dads swaggier then me😳

She might not be quite as confrontational as her dad, but Heal shares similar on-court characteristics, including playmaking and red hot shooting from deep.

But she has one notable edge. "I love playing defense – so I think I'm a better defender than him," Heal chuckles.

Fortunately, because the diminutive Heal knows she can't hide on the 3x3 court. "3x3 is more physical and there aren't as many fouls called," she says.

"On offense, I concentrate on taking it to the hoop a lot – you have to adjust and try to draw the contact with tricks like up-fakes."

Heal made an immediate 3x3 impact when she took home the MVP after leading Australia to the gold medal at last year's FIBA 3x3 U18 Asia Cup in Malaysia. She starred throughout with 30 points in 5 games but saved her best for last with a game-high 8 points in the final against Japan.

It was simply a jaw-dropping 3x3 debut. "I was happier that our team took home gold as that was my main focus but winning MVP was the cherry on top," she says.

Heal, who is considered a WNBA 2021 draft prospect, played her first 3x3 tournament since Malaysia last month at the FIBA 3x3 Satellite Moomba in Australia before the coronavirus crisis essentially shut down everyday life, including sports in Australia.

With more free time, she has enjoyed precious family time in Sydney but the motivated Heal has kept grinding. "I’ve been doing heaps of stair running and sprints in the neighborhood," she says.

"We just got a hoop so we are still getting all our shots up each day along with dribbling in the driveway."

Heal isn't sure when she'll next play 3x3 but the future looks incredibly bright having been called up to the senior women's Australian team's camp before the coronavirus situation spiraled.

Assuming they qualify, the powerful Australian team is poised to be a strong contender in Tokyo next year and the talented Heal could be in the mix.

"Whether it's for 3x3 or basketball, going to the Olympics is definitely a goal of mine," she says. "It would be really exciting."