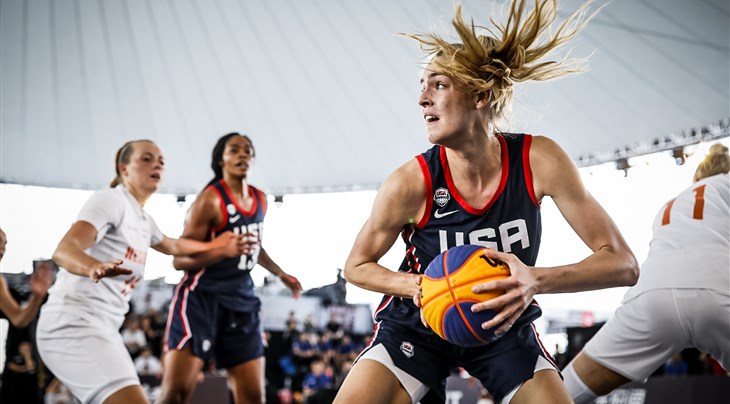 BETHESDA (Maryland) – For Bella Alarie, it was a dream come true. On Friday evening, the three-time Ivy League player of the year heard her name called by WBNA commissioner Cathy Engelbert in a special moment that she shared with her family in Bethesda.

“With the 5th pick in the 2020 NBA Draft, the Dallas Wings select Bella Alarie, from Princeton University.”

WHAT'S UP, DALLAS?! thank you for this amazing opportunity! i can't wait to put on the wings uniform and give you my best! 💙💚 https://t.co/RmowRGVX3l

This was a historic evening on several fronts. Alarie became the first Ivy League woman in 22 years in be selected in the first round, and the third child of a former NBA player. Her father, Mark, played at Duke University and went on to play five seasons in the NBA, four in Washington, D.C.

Beyond her dominance of the Ivy League, Alarie has also been a mainstay for the US national team in 3x3 basketball in 2019, taking part in the first edition of the FIBA 3x3 Women’s Series, playing in five different stops. “That was really cool, a totally different style of basketball, super out of my comfort zone, and you end up playing a lot of professional women’s basketball players that are older and super mature,” told Alarie in a video podcast with USA Basketball.

"That was super valuable, and it’s been important to me to become a more physical basketball player. Those are definitely really physical and tough matches in 3x3.”

Alarie was also able to travel the world during her time with Team USA, filling her passport with stamps from three different continents. “Getting to travel the world, that was a really valuable experience to me. I absolutely loved it… I definitely gained a lot from it.

Alarie joins several other members of the draft class who have also played FIBA 3x3. In fact half of the players picked in the Top 10 have significant 3x3 experiences, starting with #1 overall pick, Sabrina Ionescu.

Sabrina Ionescu (Drafted: 1 by the New York Liberty) – The #1 overall pick and nightly triple-double threat has been dominating on the national stage for the University of Oregon for years. Her excellence extends to 3x3, where she won a gold medal for Team USA at the 2019 Pan American games and helped USA to a quarterfinal run at the FIBA 3x3 World Cup 2018. She also famously said in a press conference she would choose to play 3x3 at the Olympics if she was given the choice.

Satou Sabally (Drafted: 2 by the Dallas Wings) – Sabally joins Oregon teammate Ionescu at the top of draft, with a versatile, inside-and-out game. She also represented her home country of Germany at the 2019 European Games, finishing fourth in 3x3 despite entering the tournament as the 15th seed. The Dallas Wings officially became a 3x3 household with former FIBA 3x3 U18 World Champions Kaela Davis (2012), Astou Ndour (2011), Arike Ogunbowale (2013, 2014) and Katie Lou Samuelson (2014) already on the roster, not to mention Kristine Anigwe who won silver in 2015 (with Ogunbowale).

Ruthy Hebard (Drafted: 8 by the Chicago Sky) – Another Oregon standout, Hebard teamed up with Ionescu in the Philippines at the FIBA 3x3 World Cup 2018, catching our eye with her two-way game, never-give-up-mentality and dexterity around the rim.

Megan Walker (Drafted: 9 by the New York Liberty) – The UCONN star and elite shooter is headed to the Big Apple to play alongside top pick, Sabrina Ionescu. Before she was at college basketball’s most elite program, she was a member of the Team USA’s FIBA 3x3 U18 World Cup 2016 team, finishing second to France and earning Team of the Tournament honors.