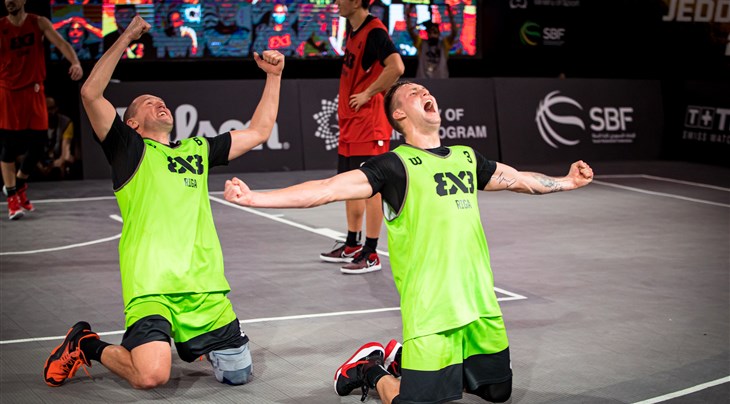 JEDDAH (Saudi Arabia) - There is a new king sitting on 3x3's throne with Riga taking the crown after memorably winning their first World Tour Final.

The Latvians spectacularly claimed the World Tour's biggest prize to take down world No.1 Liman in Jeddah and ensure they are now 3x3's top dogs.

Here are the reasons why Riga are the new champs.

Karlis Lasmanis and Nauris Miezis are simply 3x3's best duo. They might be affectionately called 'Batman' and 'Robin' but these two bad dudes are co-stars in the biggest show on the World Tour.

This two-headed monster complement each other perfectly and it's not a stretch to say Lasmanis and Miezis are the two best players in the world. In a game with so few players on the court, that sheer level of talent is going to overpower almost anyone.

The superheroes were at their best when it mattered most combining for an insane 70 points in Jeddah to top the scoring charts. No other tandem came close - Liman superstars Stefan Kojic and Mihailo Vasic were next best with 57 points from the same amount of games.

There is no ego between these Latvian marvels - they just want the best for each other and their team. Both have seemingly gotten better with 26-year-old Lasmanis now starting to be a more reliable two-point shooter, while 29-year-old Miezis has more confidence in taking over offensively as he memorably showed with a Tissot Buzzer Beater for the ages.

They are also two of the most entertaining players on the circuit. Miezis is constantly on top of the highlights tally - as he was in Jeddah - through his wizardry handles and precise passing, while no one can soar like Flight KLM.

It's highly possible because these superheroes are just tapping into their magical powers.

When the game is on the line who do you call? Lasmanis? Miezis? Edgar Krumins? Riga are in the enviable position of having three assassins in the clutch. Miezis and Lasmanis have now hit two of the greatest shots in 3x3 history, while sharpshooter Krumins has also numerously come up big when it matters most.

It's an absolute nightmare for opponents who don't know which one of them to guard. For Riga, there is no 'hero ball' - they will trust each other to make the right play.

Once upon a time it was Novi Sad performing David Blaine tricks, now it's Riga who can rise from the dead. Their comeback against Liman in the Doha Masters final is already legendary - so too not buckling under the pressure in Jeddah.

When the stakes are raised and the pressure intensified, Riga were nerveless and proved they had the championship mettle. They were 6-0 this season in games decided by 2 points or less and Nauris Miezis led all players in Tissot buzzer beaters with 3 in 2020.

Don't forget about Krumins and Cavars

Edgar Krumins has always had a wet stroke but he really came of age as a player this season. He became a reliable third option and just can't be left open - which is difficult with so much of the scheming for opponents centered on Lasmanis and Miezis.

Krumins wasn't at his best in Jeddah with his two-point shot unusually off but he didn't have to be considering the lights out performances of the deadly duo.

The powerfully built 1.95m (6ft 5in) player had been sensational in Doha, where he finished second overall in scoring with 34 points, including hitting 11 two-pointers. He was so good that even MVP Miezis believed the award should have gone to Krumins.

For the first time in a while, Krumin's surgically-repaired knee did not seem to bother him and he became much more aggressive driving to the basket, meaning that he was no longer a one-trick pony.

Easy to overlook but Agnis Cavars is the team's glue guy and of great importance to Riga's success. He might not be flashy like his teammates and he doesn't score that much - 9 points in 5 games in Jeddah - but the imposing 1.96m (6’ft 5in) big fella does all the little things.

Cavars is a rebounding machine and topped the charts in Jeddah with 28 boards, including several crucial offensive rebounds. He's one tough dude and strong as oak to ensure he's the defensive anchor.

It all means that Riga have almost perfect chemistry with these four guys meshing. seamlessly. They have consistently played with one another over the last few years to build vital consistency and habits. Riga might be more known for their breathless offense but they play terrific defense, which is at the core of their success. In Jeddah, they lifted their intensity in the knockout stages and suffocated Ub (11 points) and Novi Sad (15) who both could not handle Riga's size and strength.

Much like in the Doha decider, Riga were able to defend for their lives in the dying moments to restrict Liman from scoring the bucket needed for the title.

2m (6ft 7in) Lasmanis has the obvious athleticism to switch on opponents, Miezis has quick hands for steals, Cavars is the inside enforcer while Krumins - not the quickest player - has the bulk to at least be physical on defense.

Like all champs, Riga are a brilliant two-way team and that's why they are now 3x3’s team to beat heading into 2021.