Who can help USA qualify with women to the Tokyo 2020 Olympics in 3x3? 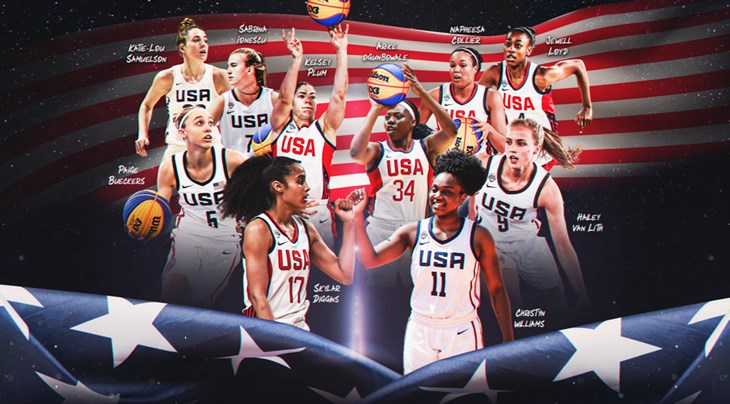 BENGALURU (India) - After winning the first 2 editions, the US have not won the FIBA 3x3 World Cup in the women's category since 2014. Here are 10 players who could bring back the country to the Golden age at the Tokyo 2020 Olympics.

Christyn Williams earned the right to be mentioned first as she is the top ranked player in the US. The University of Connecticut star knows what it takes to win: she won gold at the FIBA 3x3 U18 World Cup back in 2017. Last summer she turned heads and ankles at the FIBA 3x3 Women's Series. Her spin cycles are more dangerous than Diet Coke and Mentos.

Think she's the only one who won gold for the US in 3x3? Last year's WNBA rookie of the year Napheesa Collier brought her deadly post moves to the Youth Olympic Games 2014 in Nanjing. She went home with a gold medal around her neck. Will the 23-year make it from the Youth Olympics to the Olympics? We all jumped on the bandwagon when the triple-double queen Sabrina Ionescu would play 3x3 at the Olympics if she had to choose between the 2 disciplines, The Oregon Duck superstar caught our eye at the FIBA 3x3 World Cup 2018 and that night she dominated the US Trials. She plays hard and there's nothing she can't do. Her IQ is like your SIM PIN: it has 4 digits.

Kelsey Plum has not yet repped the US in 3x3 competitions but the Las Vegas Aces star is made for this game. We've all made the James Harden comp because of her spot-on lefty jumper. After winning gold at the FIBA Basketball Women's World Cup 2018, she could be a key addition to the US 3x3 women's national team. Only trouble is her NFL arm may be too strong for the 3x3 half-court...

At 22 years old, Arike Ogunbowale might the most decorated 3x3 player in the US. She won 2 gold and 1 silver medals in 3x3 in youth categories. From 2013 to 2015, she showed the world nobody drives harder to the basket on the 3x3 scene. Since then, she hit 2 of the most clutch shots in the history of basketball at the 2018 NCAA tournament. If you're any other team at the FIBA 3x3 Olympic Qualifying Tournament, you don't want Arike to make her 3x3 comeback in 2020.

Talk about 3x3 pioneers, Skylar Diggins-Smith won the first-ever edition of the FIBA 3x3 World Cup back in 2012. She went on to have an outstanding basketball career and became an inspiration for millions of female athletes worldwide. The 3x3 fans would love her handles and sniper abilities.

She was the MVP last time the US won a FIBA 3x3 World Cup in the women's category. Jewell Loyd is an electrifying player who went on to win her first WNBA and FIBA Basketball Women's World Cup titles in 2018. She's fast, she can shoot, she's unstoppable one-on-one. Should we say more?

If the US go young, they could also go with Hailey Van Lith who - like Katie-Lou Samuelson - won 2 gold medals at the FIBA 3x3 U18 World Cup and the Youth Olympic Games. Her go-to in and out to her left already ended too many careers. The lefty playmaker plays tough, can splash from the 3x3 logo and is a spectacular passer. You say she's still in high school. We say she might be ready already.

The 2018 Youth Olympic gold medalist Paige Bueckers is only 18 and she has already graced the cover of SLAM Magazine. If you're not following her on Instagram. you're missing out on one of the most skilled players we've ever seen. That Paige is a walking bucket.

The US squad will fight for 1 of the 3 tickets available for Tokyo 2020 Olympics at the FIBA 3x3 Olympic Qualifying Tournament in Bengaluru on March 18-22. They'll start the competition in Pool A together with France, Germany, Uruguay and Indonesia.