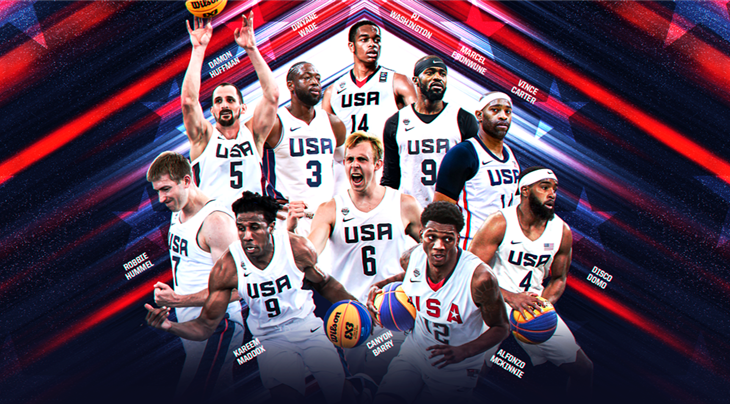 BENGALURU (India) - After years of early exits and disappointing losses, the United States finally won gold in the men's category at the FIBA 3x3 World Cup in 2019.

Now that this curse is over, the USA are coveting more 3x3 gold, this time at the Tokyo 2020 Olympics. The journey starts in Bengaluru with the FIBA 3x3 Olympic Qualifying Tournament on March 18-22. Yes, but with which players? Do you take the same team that won the World Cup last year? How about those who shined on the pro circuit last year, the matured rising stars and a few wildcards who could find interest in making history by becoming the first players to win Olympic gold in both disciplines of basketball? We take a deep dive below.

Dominique Jones aka Disco Domo, the number 1 ranked played in the US and 9th player in the world automatically comes to mind. After all the dude was named MVP of the World Tour regular season in 2019. At just 5ft. 10 in. (1.78m), the 31-years-old Jones is a mature, experienced 3x3 player who plays with a chip on his shoulder. Domo is a physical downhill driver and creative scorer who is also more than comfortable using his handles to create space and knocking down shots off the bounce from outside. He took on the role of 3x3 ambassador early and has shown his competitive spirit repeatedly.

The Purdue Boilermakers product and former NBA sniper Robbie Hummel is one of the best shooters you’ll find on a 3x3 court. He’s the 2nd ranked player in America and complements Jones’ physicality as a driver well because he is extremely efficient popping for and knocking down open two-point jumpers. Hummel is a tough cover with a quick release. He wasn't named MVP of the World Cup 2019 for nothing.

Former Princeton star Kareem Maddox has emerged as a viable option for the Americans thanks to his big frame, ability to finish plays creatively rolling to the rim with both hands on the interior and with his rebounding and defensive versatility. Maddox is the 3rd ranked 3x3 player in the USA and doesn't need the ball in his hands to positively impact the game.

Damon Huffman is 18th in the individual world ranking and was a key contributor in that World Cup gold run last year. The man plays hard, has great 3x3 IQ and has found a rare ability to hit clutch shots at pivotal moments. He was definitely the MVP of the final at the World Cup last year.

He may be the biggest enforcer on the 3x3 circuit. The physical Marcel Esonwune can also step out and defend on the perimeter, which is a huge part of 3x3 basketball considering all of the pick-and-roll and isolation action. 'The Bouncer' is equally comfortable exploding off of two-feet for a big jam or sliding and blocking a jump shot defensively. If he makes to India, he has a spot booked for him in the Top 10 Plays of the tournament video.

Canyon Barry, son of Hall of Fame NBA scorer Rick Barry, would provide a high basketball IQ combined with a sharp catch-and-shoot option for Team USA. At 6ft. 6in, (1.98,), it doesn’t take him long to get his shot off (except on the free throw line...) and he consistently makes the extra pass within the offense.

27-year-old Alfonzo McKinnie, who currently plays for the Cleveland Cavaliers, won a silver medal at the FIBA 3x3 World Cup 2016, so he is a wildcard who could be involved should he choose to put his name in the hat this summer. He would provide versatility as a "2 and D" guy, who would be extremely tough to contain as a slasher at the 3x3 level.

Charlotte Hornets rookie forward PJ Washington played at the FIBA 3x3 U18 World Cup in 2015. His game also translates incredibly well because he’s a team-first player with size who has turned himself into an excellent jump shooter over the past two seasons. He’d be lethal in rebound-kick out scenarios and would also provide the asset of being able to switch on the perimeter defensively.

Vince Carter is in his 22nd NBA season and has announced that he will retire from the league in April. With the Olympics just around the corner in July perhaps Half-Man, Half-Amazing will still have the legs and competitive spirit to try to become the first player to win a gold medal in two disciplines of Olympic Basketball. VC at the Olympics again - except French seven-footers - who says no?

Dwyane Wade could also potentially make history with gold medals in both disciplines of Olympic Basketball. The former Miami Heat star is an ultra competitor and his game is built perfectly for 3x3 basketball. Even though he retired from the NBA a year ago, 3x3 defenders would have a tough time keeping the 6ft. 5in. (1.93m) star in front of them on forays to the rim. Wade has already traversed the world, though, and has acclimated seamlessly to being around his family and running his businesses since he retired from basketball.

Still, we can dream, can’t we?