Who can help the Philippines qualify to the Tokyo 2020 Olympics? 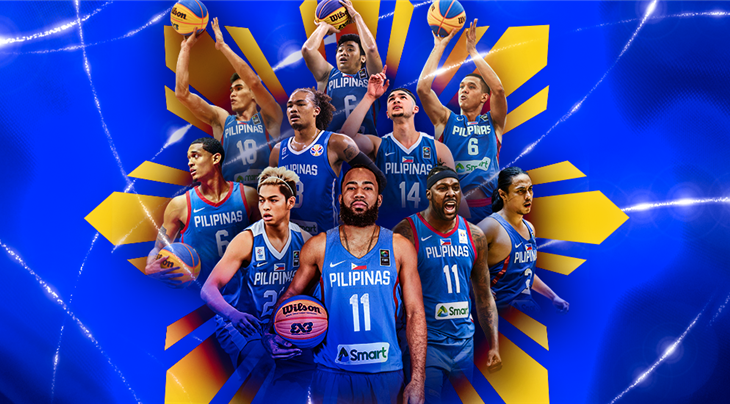 MANILA (Philippines) - The Tokyo 2020 Olympics will certainly be the centerpiece sporting event this year, and one country hoping to barge into the competition is ASEAN basketball powerhouse Philippines.

The FIBA 3x3 Olympic Qualifying Tournament (OQT) will grant 3 tickets to the Olympics by gender and will be held in India in March. The Philippines are in Pool C along with Slovenia, France, Qatar and Dominican Republic.

Which ten players can potentially help the Philippines 3x3 team make it to the Tokyo 2020 Olympics?

Joshua Munzon should be a shoo-in for the Philippines' OQT squad as he is the top-ranked 3x3 player in the country. He gives them great athleticism, length, and versatility on the floor and will be a force in the OQT.

Another expected call-up is former collegiate superstar Alvin Pasaol, who is the second-highest ranked 3x3 player in the Philippines right behind Munzon. At 1.93m (6ft 4in), Pasaol gives the Philippines some heft to go along with his offensive explosiveness.

Karl Dehesa is also another player to watch, given his experience in 3x3. The former Philippine Basketball Association (PBA) player is ranked fourth overall among all Filipinos, and his abilities to break defenders down and pull up from beyond the arc make him a tantalizing OQT prospect.

Honoured for the opportunity to play in front of the passionate Filipino 🇵🇭 fans in Jeddah. Not how we wanted to finish off the year but we take it all as lessons to grow and be better next year. Super grateful for the opportunity to experience the world and play the game I love. 🏀 🌏 Thank you to @chookstogopilipinas Boss Ronald Mascarinas, Boss Melmac, and Coach E for your vision, support, and belief in all of us. And to my guys @leonardsanti25 @chrisdechavez3 @tfrank_1 @alvinpasaol I fuck with yall. U guys are fuckin warriors and I appreciate you guys. Special shoutout to my love @krystle_dizon For being super supportive and always holding me down no matter what 👊🏾😘

Ricci Rivero is a household name in terms of collegiate hoops here in Manila, owing much to his being a human highlight reel. He can jump out of the gym, slither past defenders with his patented Eurostep and dazzle with his handles and passing. He's built for 3x3 greatness.

Rivero's collegiate basketball teammate Kobe Paras has long been a known commodity in 3x3. He first broke into the scene as part of the country's 3x3 U18 national teams and camptivated everyone's imagination with his array of stupendous slam dunks. His size and athleticism can make him a terrific addition to the OQT squad.

Another talent who was born to thrive in 3x3 is spitfire scorer Terrence Romeo. Remember that Romeo was voted Most Spectacular Player of the 3x3 World Tour in 2015, and he certainly won't shy away from the opportunity to excite the crowd once more. He can slice and dice through any defense and was born to sink game-winners.

Troy Rosario is another veteran of the international 3x3 scene, having played in the FIBA 3x3 World Cup 2018 and FIBA 3x3 World Tour 2015. His size and athleticism make him an excellent matchup for any other teams with mobile big men, while his shooting creates another layer of complexity to his game.

In contrast to Rosario, Stanley Pringle won't live and die with his size and athleticism, but the flashy Filipino-American ball-handler has enough tricks up his sleeve to break ankles and take the rock strong to the cup. Pringle was a vital cog of the Filipinos' campaign at the FIBA 3x3 World Cup 2018, and he can given them a lift again in the OQT.

Next up is someone who hasn't seen action at any FIBA 3x3 event yet, but boy, if Jordan Clarkson does get tapped, he should be a game-changer. The newly minted Utah Jazz scorer can tickle the twine with regularity and can alter the complexion of any contest on his own. If the Philippines can get him on board, they'll be among the favorites.

"My heart is full of gratitude for everyone who helped make this happen."@JordanClarksons will be representing the Philippines in #AsianGames2018→ https://t.co/a4kRRNbhKJ pic.twitter.com/hONdPEm8CV

Another potential game-changer is behemoth Andray Blatche. Sure, the former NBA big man is no longer as spry as he once was, but his bulk and skill-set can still make him a force of nature in 3x3. In an ideal world, both Blatche and Clarkson could probably carry the Philippines to unprecedented 3x3 glory!