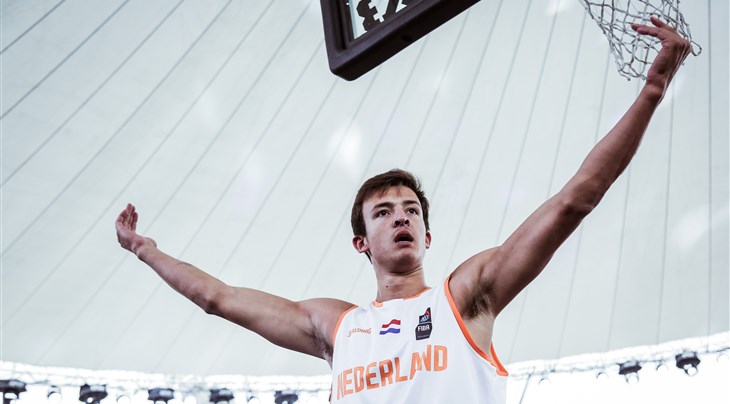 AMSTERDAM (Netherlands) – If there was a 3x3 adaptation of A Star Is Born, human highlight machine Dylan Van Eyck should be cast in the lead role.

The 21-year-old is the complete package and a natural entertainer. He is box office gold. He can score from everywhere and get higher than Rik Smits in the Last Dance. The Dutchman has swag - he knows the fans are there to watch him embarrass opponents.

"I like to put on a show and get the crowd into it," Van Eyck says. "Once you feel the crowd get into it then it motivates you more."

He has dominated every level of 3x3 so far and was the top-scorer at the FIBA U23 World Cup 2019 as he carried the Netherlands to fourth place with 53 points.

Playing with so much flair, Van Eyck has taken a page from 3x3's most dazzling player – Dusan Bulut. Before he had become a phenom, Van Eyck was a humble fan in the stands watching Mr Bullutproof pull off one of the most insane moves ever seen on a court when he punked Spain star Sergio de la Fuente at the 2017 FIBA 3x3 Europe Cup.

Van Eyck can be seen at the bottom of the screen jumping around like he's at a House of Pain concert.

"I was just flabbergasted by the move he pulled," he recalls. "I still see that video every now and again pop up.

"Even though we don't have the same playing style, he is a big influence on me just the way he puts on a show and gets the crowd behind him.”

Bulut has provided added inspiration but basketball is in the blood of Van Eyck with his grandfather and father having been noted professional players.

"My grandad is one of the best players Suriname has seen," he says. "He's a big influence and model for me.

Growing up in a small town in the south of the Netherlands provided an opportunity for Van Eyck to dedicate himself to hoops. "I always had time to develop my game on a small court where I spent countless of hours shooting," he says.

Eventually 3x3 caught his eye as a teenager and he has been hooked on it ever since. The Netherlands has been one of the pioneers of 3x3 led by the always reliable Team Amsterdam on the FIBA 3x3 World Tour.

Van Eyck has learned important lessons from the team's veterans as he eyes playing on 3x3's biggest stage.

"Team Amsterdam have put Dutch basketball on the map and they are great guys off the court," he says. "We practice against them and they give us tips on how to work on things.

"They have experience and been all across the globe playing for the national team," he adds. "They help us develop our game."

Van Eyck is waiting patiently like the rest of us but soon enough 3x3's newest star will be making the crowds go stir crazy again.