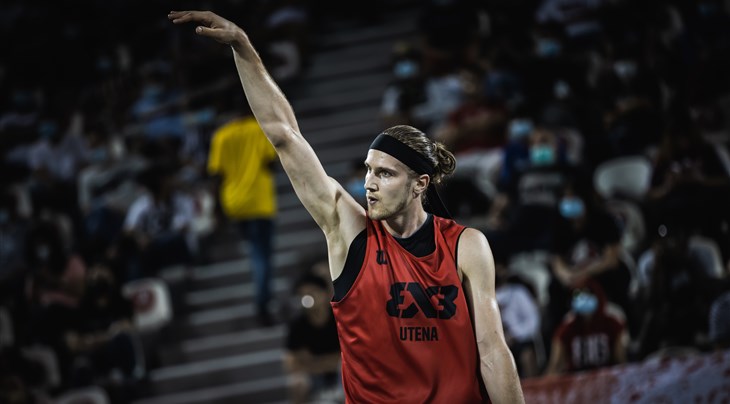 After reaching the final on their World Tour debut at the Debrecen Masters, Utena Uniclub started strong once again with 2 wins against the number 4 team in the world NY Harlem (USA) and a Lausanne Katapult (SUI) team, who finished 3rd at the Europe Masters two months ago.

The new addition Zygimantas Skucas hit three 2-pointers and a total of 9 points against the New Yorkers, who played without a sub. The game against Lausanne was a whole different story (read more in “The Game”).

Three more teams had a perfect day on Friday with 2 wins before the limit:
• The number 1 team in the world Liman (SRB) had the best defense on Day 1, conceding just 23 points overall.
• Last year’s Doha Masters winners Riga (LAT) shot 41% from behind the arc as a team.
• Last year’s World Tour runners-up Princeton (USA) had a little scare against the sub-less Ub (SRB) but Kareem Maddox’s Tissot Buzzer Beater saved the day

NOT TODAY! 🚫@KareemMaddox with huge block and the @Tissot buzzer beater! #3x3WT pic.twitter.com/bxwoDmbGUF

After both teams beat NY Harlem, the goal for Lausanne and Utena was to avoid a clash with the number 1 team in the world Liman (SRB) in the quarter-finals.

The Swiss started with the pedal on the gas with 4 two-pointers in 2 minutes to build the biggest lead of the game at 9-5. Gilles Martin scored a big 2 who gave Lausanne a 13-11 lead after 4 minutes but then the Lithuanians went on a 5-0 run (with everyone scoring on the team).

Lausanne’s last-minute addition Musa Abdul-Aleem caught fire with back-to-back 2s to tie the game at 18. Sulskis responded and Abdul-Aleem went on a bit of a heat-check, which was punished by Skucas from behind the arc. Incredibly, Utena only missed 3 shots and 1 free throw in the entire game (16/19 including 3/3 from behind the arc and 2/3 from the line). Oh and maybe even more incredibly, Skucas hit a 2 with one shoe and then got a tech for trying to block a shot with his other shoe.

For reference, before the event, Ignas Vaitkus (Utena Uniclub) led the Tour in player value with 7.6 per game. Only 2 other players exceeded 7 per game (Westher Molteni at 7.5 and Stefan Stojacic at 7.3).

• Our new Lithuanian star Skucas 'aka 'the Lithuanian Rodman' had an absurd 11.1 PVAL/game. He shot 63% from the field and led all scorers.
• The number 2 player in the world Nauris Miezis had an outstanding 8.7 PVAL/game after averaging an impressive double five of 7 points and 7 rebounds on Day 1.
• Skucas' teammate Sulskis was 3rd with a 8.6 after missing just 1 shot all day (on 12 attempts!)
• Kareem Maddox (Princeton, USA) averaged 8.5 thanks to a tournament-leading 9 rebounds per game.
• Liman (SRB) sharpshooter Stefan Stojacic was 5th with 8.2 after scoring a team-high 6.5 points on Friday.

• As mentioned, Skucas led all scorers with 18 points, 1 more than crowd favorite Joshua Munzon of Manila Chooks TM (PHI).
• Three different players had a Triple Five on Day 1:
- Maddox had a crazy 9 points, 8 highlights, 13 rebounds game against Ub (SRB), one of the best stat line in World Tour history.
- Souley Ndour (Lusail, QAT) had a monster 10-point, 5-highlight, 7-rebound game against Manila.
- Mark St Fort (Yoyogi Crayon.EXE, JPN) had 9 points, 9 rebounds and 5 highlights in the loss against Jeddah (KSA).
• Lausanne Katapult (SUI) set a new all-time World Tour record for the Tissot Fastest Game by beating NY Harlem (who came here without sub and played part of the game with just 2 players) in just 5 minutes and 19 seconds of playing time. The stage is set for day two at the Doha Masters! #3x3WT

WHO CAN STILL QUALIFY FOR THE FINAL

As we explained in the preview, 10 tickets are already stamped for the FIBA 3x3 World Tour Jeddah Final. After the pool stage, there are now 5 teams who can compete for the last 2 tickets.

Currently, Ulaanbaatar MMC Energy (MGL) are 11th with 53 points and Amsterdam (NED) are 12th in the standings with 50 points.

Three teams – who make their season debut in Doha - can still leapfrog them tomorrow IF they reach the semi-finals.

If one of Princeton (USA), Bielefeld LFDY (GER) or Lusail (QAT) wins its quarter-final tomorrow, Amsterdam (NED) will be automatically out.

If two of them win then neither Amsterdam (NED) nor Ulaanbaatar MMC Energy will qualify for the Final.

If all of them do, well, out of these 3, the 2 best-ranked in Doha will fly to Jeddah.

Find out who qualifies for the Final by watching the knock-out rounds LIVE on our official YouTube channel.