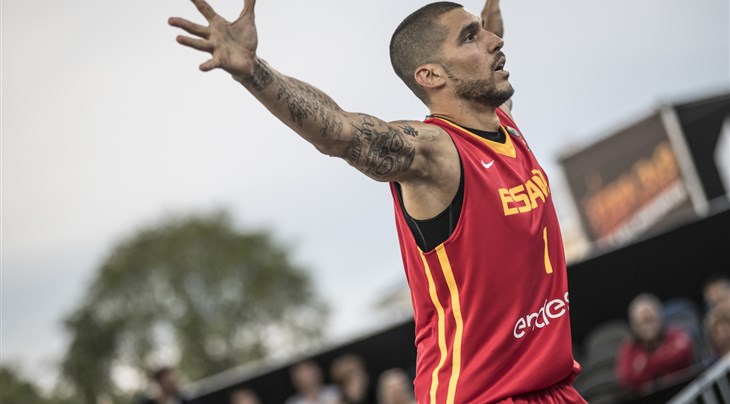 BARCELONA (Spain) – Over the past few months, as people retreated to their homes due to international lockdowns, many were left wondering how they could help others.

Nacho Martin, the number six ranked player in Spain, had an idea when he stumbled upon all of his old basketball gear.

“When I came back to Barcelona, where I usually live, I got to my place and saw a lot of stuff that I don’t really use.” As a self-proclaimed shoe collector, he realized that there were others who may have fallen on hard times and could use one of his numerous extra pairs.

“I thought that someone needs it more than me because there’s a lot of people struggling right now with coronavirus and not having jobs.”

He posted to social media to let fans know that he would be at the local park to give away shoes, jerseys, shirts, and other apparel from his long basketball career.

This was not the first time that Martin has done a giveaway like this. He said that he has done this about once a year for the last four or five years. People know of his philanthropy in the area and have come to appreciate his work.

“People tell me that it’s not easy to get a size 15 or 16 (US) shoe, and to get it for free is even better. I like that now, these kids are going to be playing with my shoes, my clothes, and that’s really nice.”

The court where he gives the gear away also holds a special place in his heart. It is the same court where he first began playing 3x3 and streetball, almost 20 years ago.

“Everything for me, with streetball, started there. That’s why I always go there to give my things away because this court brings me really good memories.”

Already, the spirit of giving has caught on to his fellow basketball-playing friends. “Some of my friends from Barcelona did it too. When I posted to social media, a couple of friends asked if they could come and I said of course. After I posted everything, my friends told me they want to do the same thing in Madrid and Andalusia, so it’s good that they see me now and want to do it in their cities.”

Martin plans on continuing this initiative, whether in Madrid, Barcelona, or another city in Spain. He believes in the importance of giving back to the game which has given so much to him, a noble endeavor as anything he will do on the court.