'The Ten-Minute Sprint' episode 2 recap - Who's on the FIBA 3x3 Hall of Fame? 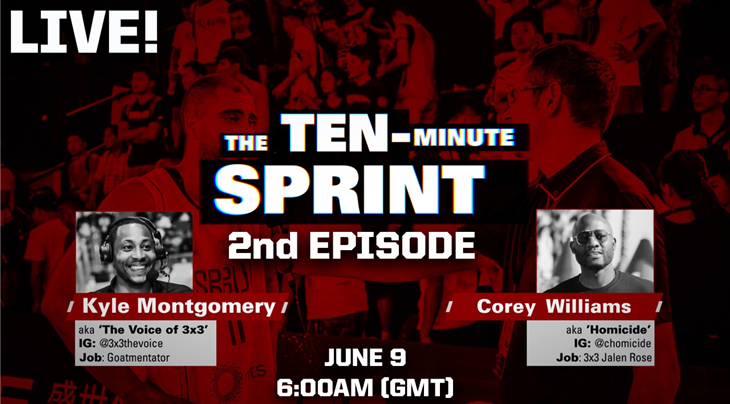 LOS ANGELES (USA) - We’re getting closer to the return of sports around the world, and as the summer heats up, so do the hot takes from the voices of 3x3, Kyle Montgomery and Corey 'Homicide' Williams.

In episode two of FIBA 3x3's new online show The Ten-Minute Sprint, the lad with the gift of gab, Kyle Montogomery, and former NBL champ Corey Williams give their Mount Rushmore of FIBA 3x3, on both the men’s and the women’s side.

The duo began the show by talking about the most recent events surrounding racial equality and the subsequent protests across the globe.

Montgomery agrees. "The love is palpable… As a person of color here in the United States, this stays near to my heart."

They moved on to the main event, who would sit atop their FIBA 3x3 Mount Rushmore. Kyle and Corey chose four men and four women to round out their crews.

Of course, the number one overall pick was an easy one…

Kyle Montgomery took Dusan Bulut, the current number one player in the world in the FIBA 3x3 rankings. “You can’t start a Mount Rushmore of 3x3 without him.” One the women’s side, Anna Leshkovtseva was taken number one overall by Williams, who labelled the Russian as the women’s 3x3 Goat. Somewhere out there, Corey is still reading off her lists of endless accomplishments.

Montgomery put the Goat conversation up for debate by picking Europe Cup 2017 MVP Anastasia Logunova, who he claims is the most dominant women’s 3x3 player he has ever seen. So, did they get it right? Who would be on your FIBA 3x3 Mount Rushmore?