The 3x3 stars dreaming of following their parents as Olympians 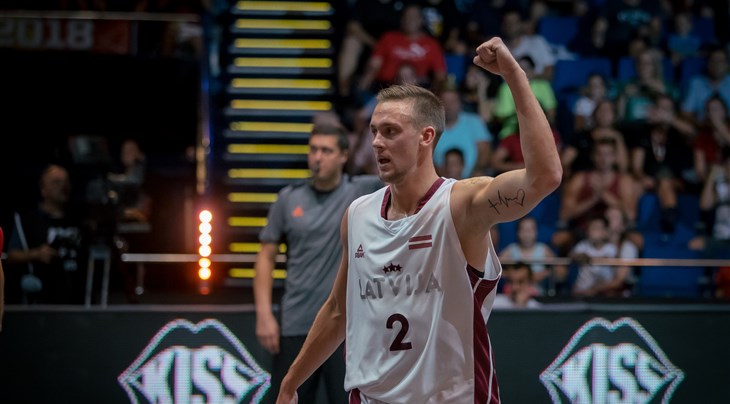 MIES (Switzerland) – Some of 3x3's brightest stars are hoping to emulate the footsteps of their parents and become proud Olympians as 3x3 makes its Olympic debut in Tokyo in 2021. On Olympic Day, we share their story.

Latvian superstar Karlis Lasmanis is inspired every time he uses his mobile phone, which is obviously frequently. His phone's wallpaper sports the Olympic logo and is a reminder of his special family connection

His dad is two-time (Barcelona 1992 and Atlanta 1996) Olympic rower Uģis Lasmanis, who has been the lefty's biggest influence. "I don't need the fame or anything, I just want to show my father that I can win," he said. "He was the smallest guy (in his rowing team) but had the heart of a lion and that is the reason why he reached the Olympics."

Lasmanis, along with his 'Robin' - Nauris Miezis, will lead Latvia's Tokyo push at the FIBA 3x3 Olympic Qualifying Tournament next year. 'Batman' believed his dad's experiences would serve him well if Latvia eventually qualify for the Olympics.

But Lasmanis isn't the only 3x3 player to be the child of an Olympian. Swiss star Natan Jurkovitz, another high-flyer, is the son of Jean-Marc Jurkovitz who represented France in volleyball at the 1988 Olympics in Seoul.

"He would tell me stories (about the Olympics) and it sounded like a dream," Jurkovitz recalls. "It's not a dream anymore, it's something I want to do."

Switzerland aren't in the running for a men's 3x3 Tokyo berth, but 'Swiss Khalifa' hoped to one day realize his Olympics dream and put his country on the hoops map.

"Switzerland will probably never go to the Olympics (in basketball), so only 3x3 can get us there," he said. "It (Olympic qualifying) will be a big impact for 3x3 in Switzerland.

Two 3x3 women players also have famous lineage. Teenaged talent Shyla Heal's father Shane is one of Australia's most capped Olympians. The former NBA player represented Australia at four Olympics, including in Sydney in 2000 when the home nation went all the way to the semi-finals.

The 18-year-old, who won the MVP at last year's FIBA 3x3 U18 Asia Cup in Malaysia, could be in the mix to be part of a powerful Australian team tipped to qualify for Tokyo.

"Going to the Olympics is definitely a goal of mine. It would be really exciting," she said.

It's obviously incredible to be the child of an Olympian, but imagine both your parents having participated at the pinnacle of sports? It's probably not a surprise that Russian great Anna Leshkovtseva has such great genes considering she's arguably 3x3 women's Goat.

"I want to be at the Olympics so much," Leshkovtseva said. "I want to follow in their footsteps. That's why we are trying everything possible to be there."

The Olympic flame has always flickered for these 3x3 stars as does a burning desire to match the accomplishments of their parents.