The 10 most memorable underdog stories in 3x3 history 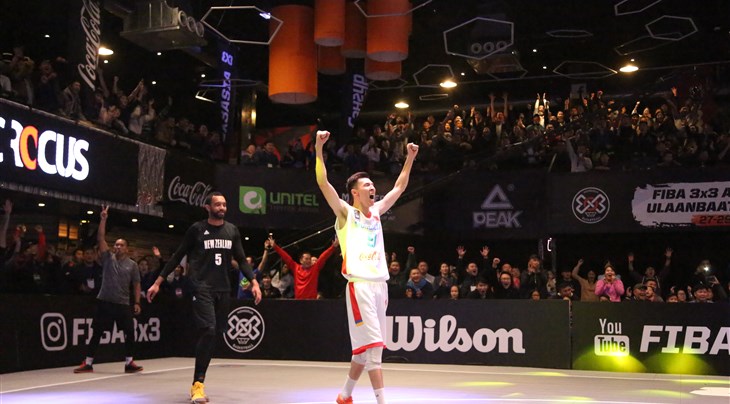 MIES (Switzerland) - Everything can happen in the 10-minute sprint of 3x3. We've had some crazy upsets since 2010. We looked at the lowest seeds to ever win an event. Here's our selection.

In a true David vs. Goliath matchup, the Qatari Men’s National Team defeated the defending World Champs Serbia in the finals, to win their first major international event in the country’s history. After earning the final qualifying spot in Pool B (by way of tiebreaker!), they rose to the occasion in the knockout stage, defeating Estonia, Czech Republic, Lithuania, and Serbia. "It is one the best moments of my career and it shows that there is an opportunity for smaller nations like Qatar to be successful," said captain Yaseen Musa.

Gagarin came into the tournament as the 15th seed, lost their first game of the tournament to Novi Sad, and proceeded to go on one of the most memorable 3x3 runs. They won their next four games, including three vs. top-20 teams in the world, and came back in the final to win 20-18. The Russian squad consisted of four players 23 and younger, including Alexander Zuev, who finished third in scoring for the tournament and took home 1 of many MVP awards to come.

This country of 3 million inhabitants is not exactly a basketball powerhouse in Asia. The Mongolian 3x3 Men’s National Team came into the tournament as the 12th seed, an underdog to win the event. But, with their home country crowd cheering them on, they were in complete control from the first whistle. They won Pool A, defeating top ranked Japan in the process, and made their way through the knockout stage, led by MVP Dulguun Enkhbat. After defeating Chinese Taipei in round 1, they needed overtime to get past Australia, before defeating number two seed New Zealand, 19-14 in the final.

The Filipino team Manila West came into the World Tour event as the #10 ranked team and went on to have one of the most convincing tournament wins from the back of the field. After losing to second seeded Doha in the pool stage, they advanced to the knockout stage where they went on to defeat Auckland (NZL), top ranked Jakarta (INA), followed by avenging their earlier loss, beating Doha in the final, 21-17. This was the first time 3x3 fans got to watch Terrence Romeo. This was probably the loudest final in the game history. The Qatari team featured 2 players who had won the FIBA 3x3 World Cup earlier that year. Never seen something like that before, just watch.

Team Caguas rode Jonathan Garcia, Luis Hernandez and Will Martinez, three of the top five scorers in the tournament, to the World Tour win in Mexico City. The team was back on the World Tour, 4 years after Garcia won the 1st edition of the World Tour in Miami and just 1 year after his former teammate Andy Ortiz passed away in a tragic car accident. The 10th seed coming into the event, the Puerto Rican team went on to pay tribute to Ortiz after a showdown with second ranked NY Harlem in the final. In the final moments of the game, Luis Martinez corralled the rebound, ran behind the arc, and hit a contested corner two-pointer for the win to give Caguas the unlikely title.

After going 1-2 in pool play, Jakarta from Indonesia overcame all odds to claim the Tokyo Masters, winning all three of their games in the bracket by three points or less to win the event in Tokyo. The number nine ranked squad defeated three higher seed opponents in the bracket, including Nagoya in the finals behind a strong performance from sharpshooter Fandi Ramadhani and the bouncy Wijaya Saputra. Fun fact: the 3x3 Olympic tournament will be played at the exact same venue!

It didn’t take long for Jeddah to make their mark on the 3x3 pro circuit. In just their third Challenger, the Saudi Arabian squad defeated number one seed Amsterdam 16-15 in the final after losing to them earlier in pool play. The team - coached by 2-time World Tour winner - Ales Kunc went on to have a successful season, all the way to the World Tour Final in Utsunomiya.

Caracas entered the Rio de Janeiro Masters as the 8th seed, but you wouldn’t know it based on their near-perfect performance. The team only lost one game, a pool stage loss to number two seed, Rio. In the knock-out bracket, the Venezuelan squad stepped up, led by the physical Michaell Flores. Their run was capped off by a convincing 18-13 win over Neuquen in the finals. Those at the event will remember the team running to the beach to take a swim with the winning cheque immediately after the prize ceremony.

In three previous appearances, the Italian Women’s 3x3 National Team had never finished higher than 5th in a 3x3 World Cup event. 2018 would prove to be their year. Led by MVP and top-scorer Rae Lin D’Alie, the Italian team had a dream final day where they defeated the United States (led by Sabrina Ionescu), top-seed China (who won the World Cup the following year), and the reigning World Champs Russia in the final, 16-12. D'Alie was on another level at that event and converted thousands and thousands of Filipino fans, transforming Manila into Little Italy.

The first time we discovered the Batman and Robin of 3x3! Seventh seeded Latvia beat the world champions from Serbia and the European champions from Slovenia back-to-back to win the title on their first-ever Europe Cup appearance. The speedy Nauris Miezis had a team-high 7 points in the final and earned MVP honors while Karlis Lasmanis, who scored a game-winning two-pointer in overtime to knock-out Serbia in the semi-finals, added 6 points.