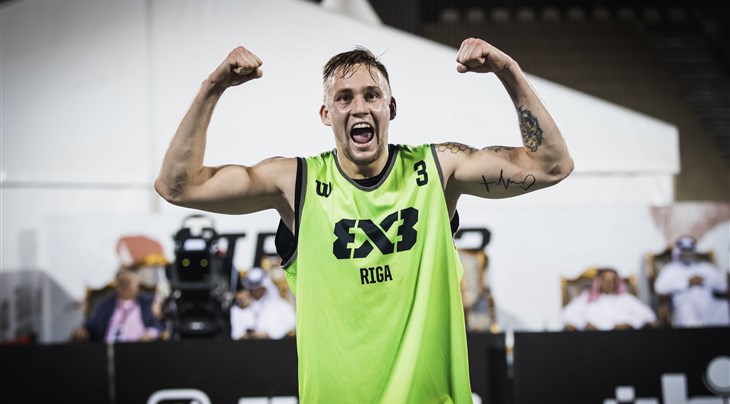 LOS ANGELES (USA) – The Doha Masters was absolutely insane and who better to review 3x3's resumption than our entertaining experts.

In the latest episode of FIBA 3x3's new online show The Ten-Minute Sprint, Kyle Montgomery aka 'the voice of 3x3' just had to deliver the bragging rights over his sparring partner Corey 'Homicide' Williams.

In last week's preview show, Montgomery accurately predicted Riga's victory over Liman in the final, while Williams' crystal ball might need replacing after his title pick NY Harlem flamed out on Day 1.

After Montgomery's victory lap, the fellas turned their attention to the epic final where Riga staged a remarkable comeback victory punctuated by Karlis Lasmanis draining a Tissot Buzzer Beater for the ages.

Where does this ridiculous title-winner rank in 3x3 history?

"The best game winning shot in the history of 3x3," said a still clearly hyped Williams. "The defense on the shot…his left hand was covered.

"They were down 20-15. You got to respect back-to-back titles. Winners find a way to win."

Montgomery wasn't quite ready to anoint it the GOAT just yet, believing Bogdan Dragovic's unforgettable slaying of Novi Sad to win the World Tour Final 2017 for Zemun still had top billing.

"I don't think that will ever be topped because of the stakes," he said. "It's (Lasmanis' shot) definitely top three but not No.1."

Lasmanis' heroics predictably filled the top spot in our top 5 plays of the tournament but there were some other outrageous moments too. Manila Chooks TM star Joshua Munzon's filthy between the legs dime made Montgomery almost speechless - basically an impossible feat!

"That was my second favorite play," he said. "The degree of difficulty….I hated seeing them eliminated early."

Williams, of course, had his own preferred choice - Stefan Kojic's effortless wraparound assist that had to be viewed multiple times to be believed. He also had special praise for Zygimantas Skucas - the 'Lithuanian Rodman' – who stole the show with his talent, abundance of energy and sheer entertainment value.

With the regular season done and dusted, attention now turns to 3x3's showpiece event – the World Tour Final in Jeddah next month. Liman and Riga will start as favorites having won all four Masters this season but the other 10 teams can't be discounted.

Who is most likely to challenge them?

Needing to rebound after his disastrous selection last time, Williams went with safety and backed four-time World Tour Final champs Novi Sad to end 2020 on a high after a subpar showing in the first three Masters in Hungary.

"I can't discount Novi Sad. They have the pedigree and are winners," he said.

The New Yorker, however, stuck to his guns and once again backed his hometown team despite their disappointing showing in Doha. NY Harlem scored just 15 points in two games but played without a sub.

"As Domo (Dominique Jones) admitted, NY Harlem did not bring it but I think they will come out better (in Jeddah)," Williams said.

Montgomery believed Debrecen Masters runners-up Utena Uniclub could finish with a bang having proved they were no one-hit wonders with a semi-final finish in Doha.

"They looked really, really good until running into Riga," he said. "They have the tools to upset anyone."

He rated fellow Lithuanians Sakiai Gulbele and Ub from Serbia as other dark horses.

Time will tell if it's Montgomery or Williams who will get the last laugh.