That other Juventus that is dominating Lithuanian 3x3 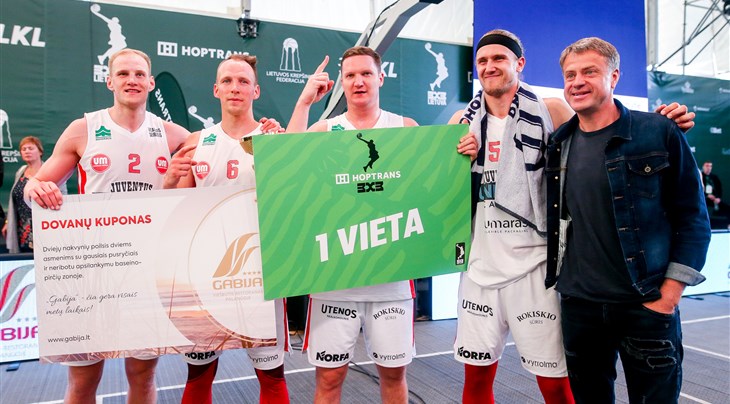 PALANGA (Lithuania) - Forget about Cristiano Ronaldo for a sec, that other Juventus (Uniclub) has now won the first 2 stops of Lithuania's Hoptrans3x3, a qualifier to the FIBA 3x3 World Tour,

One week after beating Tauras and their 3-time Olympian Jonas Maciulis in the final, Juventus this time edged out Sakiai (21-19) in the title game. Sakiai is the only team in that 12-team league with significant 3x3 experience. Not only do they rank 6th in the FIBA 3x3 Team Ranking, they also won bronze last year repping Lithuania at the FIBA 3x3 Europe Cup. Despite a surge at the end by Sakiai, former Lithuanian basketball league MVP Vytautas Sulskis converted the decisive bucket to earn another 100 points in the league standings for Juventus Uniclub.,

Juventus Uniclub's Ignas Vaitkus led all players in Stop 2 with 41 points, 11 more than the next best scorer. Not bad for a player who didn't play in Stop 1 and who had the mission impossible to replace the team's top scorer last week Darius Tarvydas.

During Stop-2, Juventus Uniclub went 5-0 once again but the final wasn't their only scare. They always won an absolute thriller in the semi-finals (21-20) against Ovidijus Varanauskas' P. Zvaigzdes.

The event continued to turn out some ridiculous Top 5-worthy candidates including nutmegs, big posters and sick dimes.

Nothing left us more speechless than the complete filth from Jokubas Gintvainis...

Juventus Uniclub heads into Stop-3 of the Hoptrans 3x3 tournament with 200 tour points. Sakiai has now moved into second place with 150 points and Tauras, who was second after Stop 1, moves to third place with 140 points. Check out the rest of the standings here.