Ten players to watch at the Hoptrans3x3 event in Lithuania 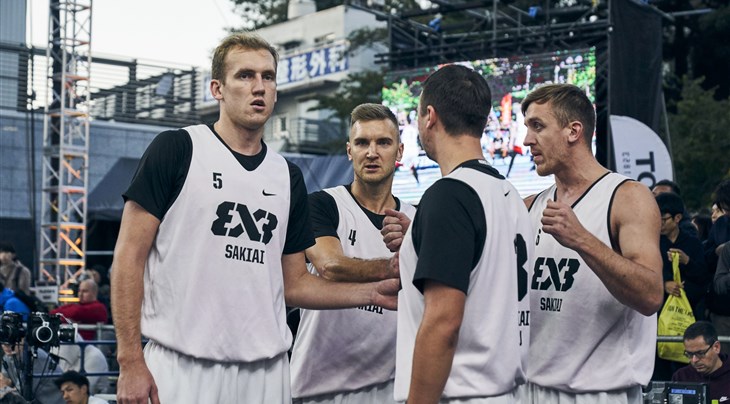 PALANGA (Lithuania) - With the best basketball teams in Lithuania slated to take the 3x3 court this weekend, we look at 10 players you shouldn't sleep on ahead of the league's debut tomorrow.

That’s how #hoptrans3x3 tournament groups look like 👀🔥 Which group is the toughest 🤔?

3x3 Experience: Varanauskas is one of the more experienced players in the field, a 4-time World Tour participant with Vilnius, including a memorable win at the Lausanne Masters in 2015, where he was named MVP. He has represented Lithuania in FIBA 3x3, including a bronze medal finish at the FIBA 3x3 Europe Cup 2014. The man goes 0 to 100 real quick and is making a much-anticipated return to 3x3 after years shining on the basketball courts.

3x3 Experience: The versatile Tarvydas joined teammate Ovidijus Varanauskas as a bronze-medalists at the FIBA 3x3 Europe Cup 2014 in addition to 3 World Tour events with Vilnius. He brought length, athleticism and shooting to the Lithuanian 3x3 national team and returns to the 3x3 arena for the first time since 2016. 3x3 Experience: Razutis experienced his first 3x3 action back in 2012 and has played along with Garso Impulsas as late as 2019. As the top-ranked 3x3 player on his team, he will need to provide the same scoring prowess and experience he plays with, in the Lithuanian NKL.

3x3 Experience: The high-flying Jogminas is no stranger to 3x3. At the U23 World Cup 2019, he took home the gold in the Dunk Competition. He heads into this tournament alongside 3x3 veteran Evaldas Džiaugys and the rest of the BC CBet Prienai squad looking to win his first 3x3 event since 2018. 3x3 Experience: The 19-year-old began his 3x3 career on fire, finishing in either first or second place in his first 6 events. This culminated in winning the FIBA 3x3 U18 Europe Cup 2019, his first-time representing Lithuania in 3x3 competition. His experience will be needed as he is on the only member of his squad with past experience in the format. 3x3 Experience: The 13th ranked Lithuanian 3x3 player, Dziaugys has been playing 3x3 dating back to 2013. The "Blade Runner" bad guy lookalike made his first World Tour appearance in 2018 and earned a spot on the FIBA 3x3 Lithuanian World Cup team last year. 3x3 Experience: Maciulis makes his professional 3x3 debut after playing the game as an amateur as a teenager. The European basketball star has been named the 2015 Lithuanian Basketball Player of the Year and has earned 3 Olympic appearances with the senior basketball team in 2008 and 2012.

3x3 Experience: Bulanovas enters the competition as the 5th ranked 3x3 player in Lithuania behind the four members of Team Sakiai. He made his international debut at the FIBA 3x3 Europe Cup 2018, and most recently represented the country at the FIBA 3x3 U23 World Cup 2019. He’s also been a member of Team Moscow (RUS) on the pro circuit since May 2019.

3x3 Experience: The clear-cut favorites in the competition, Team Sakiai is made up of the top four Lithuanian 3x3 players. The group has been together since 2018 and were the winners at the World Tour Montreal Masters 2019 and won bronze at the Europe Cup last year, representing Lithuania. 3x3 Experience: The tallest twins in the world (6ft11in, 2.12m) have a basketball resume longer than their wingspan. Good luck stopping them in the paint or contesting their sneaky efficient 2's. They're reportedly in great shape but at age 40, can they dominate in the 10-minute sprint?

Check out all the 3x3 action at the Hoptrans 3x3 tournament this Friday and Saturday on Youtube.com/FIBA3x3.