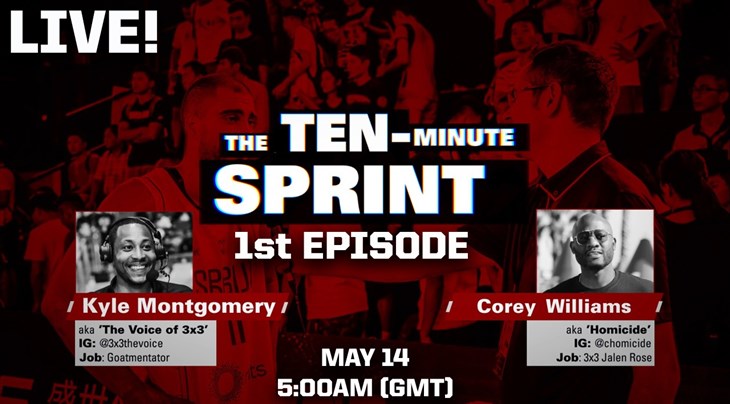 LOS ANGELES (USA) – We know you have been starved of 3x3 during these tough times. So we've called on the best duo since Will Smith and Martin Lawrence to keep you entertained.

Kyle Montgomery aka 'the voice of 3x3' and Corey 'Homicide' Williams star in FIBA 3x3's new online show The Ten-Minute Sprint. In the first episode, the smooth-talking Montogomery and former pro baller and streetball legend Williams energetically discuss what makes 3x3 so unique.

The alignment has been activated 🔥🔥🔥🔥🔥 https://t.co/swMIeSTyfB

You knew this already if you're a diehard fan - but it's a good refresher - while for newcomers it's an opportunity to gain an insight into this global phenomenon.

Let the experts share the secret for 3x3. "You are on an island, the risk of you getting exposed is higher than any other game," Montgomery says. "If you aren't a good defender one-on-one you are going to get cooked and embarrassed.

"It tests your total game. You can't hide, that's what makes it unique."

Williams says 3x3 provides dreams for aspiring players worldwide. "You can come from playing in the streets to the Olympics," he says. "You have an opportunity to come from nowhere and represent at the highest level."

On the lighter side, the duo swap hilarious stories. Mongomery recounts his first 3x3 tournament when he showed up at the 2015 Lausanne Masters in a flashy suit on a crazy hot day (the FIBA 3x3 team still brings up the story at least 2 or 3 times a year).

We love lists and gave them an assignment – rate their top three 3x3 men's and women's players. Naturally, Montgomery and Williams differed on their preferences but you'll need to watch to find out their choices.

Trust us, you won't be disappointed. Thankfully, this dynamic duo will be teaming up regularly to ensure you're 3x3 fix is sorted.