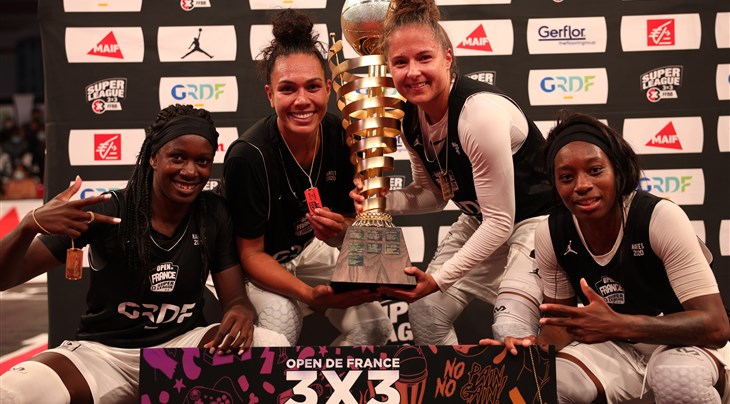 Three years after Nantes played host to the FIBA 3x3 World Cup 2017, the city of Jules Verne once again welcomed some of the best players in the 3x3 game. No less than 7 World Cup medalists featured in the two-day tournament including qualifying, organized by the French Federation of Basketball (FFBB).

In the men's category, in-form Team Paris have returned from the lengthy break on fire after winning their second consecutive event. Having clinched the Open Plus De Saint Paul earlier in the month, stars Angelo Tsagarakis, a FIBA 3x3 World Cup 2017 bronze medalist, Antoine Eito, Johan Passave-Ducteil and last-minute addition Léopold Cavalière combined well in the business end of competition.

Team Paris looked on the brink of elimination in the semis when they trailed 19-17 against Cap d'Ail Riviera but tournament MVP (and co-top scorer, tied with former teammate Dominique Gentil) Tsagarakis proved the hero with a lefty layup to seal the 21-20 comeback victory.

Their hot form proved too much for the tournament favorites Admiral Camp with a decisive 21-12 beat down in the final.

It was a disappointing end for Admiral Camp boasting the firepower of Dominique Gentil, who won silver at the FIBA 3x3 Europe Cup last year and bronze at the 2017 World Cup, the legendary Sy brothers (Amara and Bandja) and French national basketball star Andrew Albicy.

Las Campeonas overwhelmed surprise finalists Junko 21-12 to complete their hat-trick in Nantes. They won all 5 games by 7 or more points in Nantes!

Talented young team Junko provided the big shock of the tournament with a 15-13 semi-final upset over favorites Poitiers Medley, who were armed with 2-time European reigning champs Migna Touré and Marie-Eve Paget. Their 2 stars Maeva Djaldi-Tabdi and Hortense Limouzin topped all scorers in Nantes.

It capped off a memorable return of elite 3x3 action in France.