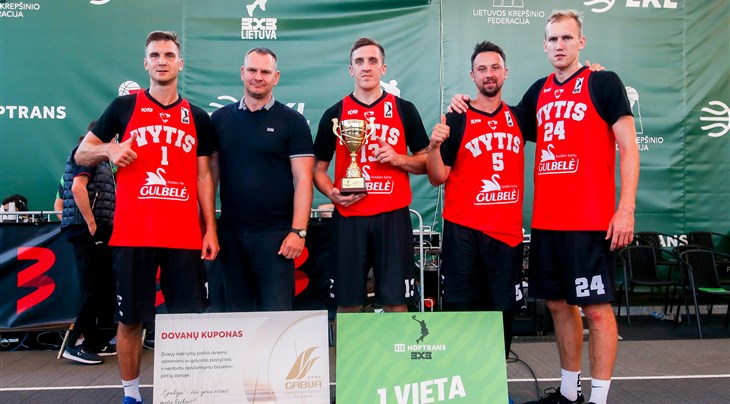 PALANGA (Lithuania) – Revenge is a dish best served cold… and dominantly. After losing in Stop-2 to Juventus in the final, Sakiai avenged their earlier defeat to win Stop-3 of Lithuania's Hoptrans3x3, a qualifier to the FIBA 3x3 World Tour.

The number 6 ranked team in the FIBA 3x3 Team Ranking and the bronze medal winners at last year's FIBA 3x3 Europe Cup (repping Lithuania), Sakiai showed why they came into the event as the favorites. They defeated Juventus Uniclub in the final, 22-13, controlling the action from the first whistle.

Sakiai Gulbele takes over Stop-3 of this #Hoptrans3x3 series after overthrowing @bcjuventus in the Final Game 💥🔥🥇🏆 pic.twitter.com/DT6N0fVDmI

The sun was shining through at the Hoptrans Arena as the action heated up over the past two days, which saw the visit of FIBA Secretary General Andreas Zagklis. After three stops, Juventus Uniclub remains the number one seed with 7 other teams joining them in the final stop.

Marijus Uzupis was named MVP of Stop-3 after a lights-out shooting performance that netted him 46 total points, 28 of them coming from outside the arc.

Heading into Stop-4, a champion will be crowned from the remaining 8 teams in the field, which can be found here. Remember the winning team will qualify to a FIBA 3x3 World Tour Masters.

There will be two pools of four teams in the final with seeding as follows: Pool A: Juventus, P. Žvaigždės, Šiauliai, and Neptūnas. Pool B: Šakiai, Tauras, Lietkabelis, and Dzūkija.

Stop-3 also included arguably the most memorable moment of the tournament thus far as Uniclub and Cbet played in an overtime thriller, earned through a 2-point alley-oop as regulation expired.