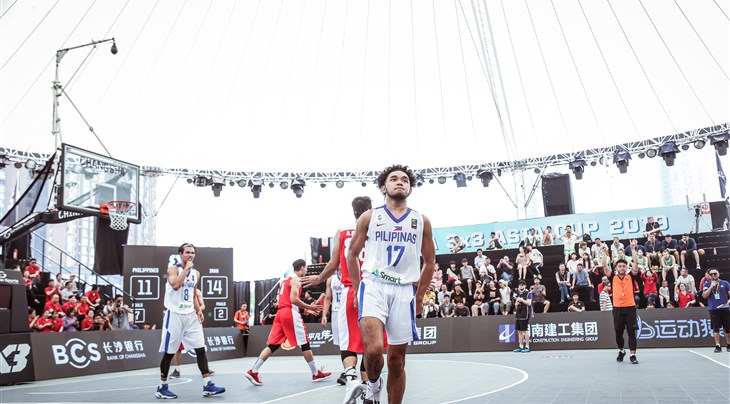 The Philippines were major underdogs against Iran at last year's FIBA 3x3 Asia Cup, a challenge made even tougher without injured star Ricci Rivero. The loss of their talisman stung the team deeply but a determined Abarrientos vowed to overcome the obstacles.

"Knowing Ricci's our main man, it hurt us seeing a teammate suffer," Abarrientos said. "But nonetheless, we really talked about it and thought that there is no other place to go but to move forward.

"We fought for Ricci as well. We wanted to make him feel that all of his hard work, especially in training, would still be worth it."

"When you think of it, it's quite impossible to beat Iran's team," he said. "But with confidence and courage, I really did my best. I didn't want to go back to my country without pride and victory, so I did my part."

Abarrientos, who is the nephew of Filipino hoops icon Johnny Abarrientos, had proven he was ready for the big stage with an eye-catching performance at the FIBA 3x3 U23 World Cup 2018.

But his tour de force against Iran was at another level. It's simply a top-10 ever 3x3 performance and the best by any Filipino player in 3x3 history. So great that it deserves to be rated alongside even Pacman's legendary bouts to sit in the pantheon of Filipino sporting feats?

The shorthanded Philippines (no subs) needed a fast start against the bigger Iranians and looked to the then 19-year-old, who made it rain from deep.

"After making the shots, I really gained confidence," he said. "I really felt at the peak and playing at my best."

Despite his individual brilliance, Iran weathered the storm and skipped out to an early lead against the tiring trio of Filipinos. The game appeared over when Abarrientos fell awkwardly after a tough contested make. "My right foot twisted when I landed," he said. “It really hurt like hell but then I just thought of fighting for the team. My team would be disqualified if I didn't play, so I didn't have a choice."

Even though he was clearly hobbled, Abarrientos put mind over matter and was further fueled by the encouragement from the Filipino fans in the stands. He was in the zone and drained twos while being fouled to amazingly put the Philippines ahead.

Defensive stops, however, were hard to come by and Iran tied the game at 19 apiece to set the stage for an iconic 3x3 Tissot Buzzer Beater. Abarrientos calmly drained his seventh two-piece to finish with a jaw-dropping 18 points and ink his name in Filipino sporting folklore.

In one of the most memorable on-court celebrations, Abarrientos screamed in euphoria: "This is for my country, for my team and for Ricci!"

"I didn't feel any pressure at all knowing my teammates really trusted me since the beginning," he said. "The hardships were worth it after winning against their team, knowing they're one of the good teams in 3x3."

Remembering his monster performance should stoke the fire for Abarrientos, who is currently keeping fit during the sports shut down in the Philippines due to the Covid-19 pandemic.

Whenever he does return to the court, Abarrientos can't wait to attempt to become a national hero again in a country which boasts a rich 3x3 tradition.

"If there's an opportunity, I wouldn't think twice about representing my country again," he said. "Since I was a kid, 3x3 has been really my thing, I grew up playing this.

"Most of the players who master basketball in the Philippines started by playing 3x3 barefoot or in their slippers."

Whatever the future holds, the talented 20-year-old already has created a 3x3 masterpiece.

Forever remembered as the 'Abarrientos Game'.