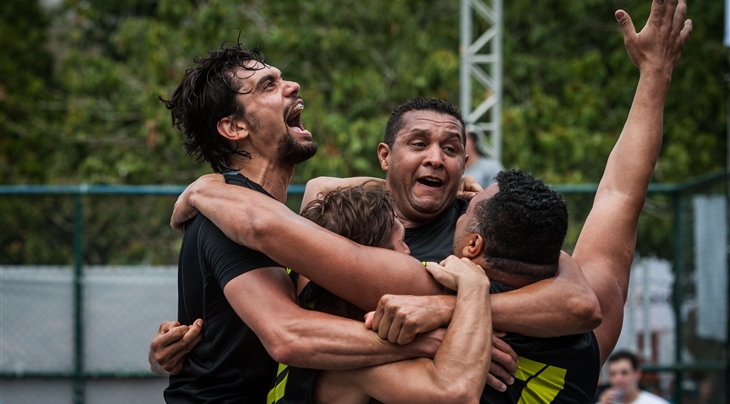 FIBA3x3.basketball: What is your role with the Brazilian 3x3 basketball association (ANB 3x3)? What 3x3 playing experience do you have?

Vinicius: I have been working with 3x3 since 2011 and was a professional basketball player until 2012 , the same year the FIBA 3x3 World Tour was launched. As ANB 3x3 president, I signed the first contract to host a World Tour Qualifier here, sending the best teams in Brazil to the Saõ Paulo Masters. In the beginning, we didn't have competitive teams, and I couldn't play in many tournaments.

But, the Brazilian national basketball federation (CBB) continued to host events like the World Tour 2014 event in Rio de Janeiro where I was able to participate. We (Sao Paulo DC) won out of all the teams in the Americas, the only Brazilian team to ever win a World Tour event in FIBA 3x3 history. After that, I ended up playing in the World Tour Final 2014 in Japan and World Tour events in Brazil in 2015 and Mexico in 2016. I have lived and have been part of 3x3 since the beginning and I believe I’ve had a good experience. What I enjoyed the most was the speed and intensity at which it is played. It’s a lot more tiring than it looks.

What is your experience now with 3x3? What types of work are you doing for the game in Brazil?

I am currently organizing more and more events. We created LIGA ANB3x3, with almost 100 permanent teams and 600 high-performance athletes, divided into 10 categories. I continue to use my experiences to develop and evolve events in Brazil, and there are now over 200 FIBA 3x3 Endorsed events. In addition to the events, we renovated two courts and left it exclusively with 3x3 lines and we have training and improvement projects for people who work at events such as referees, DJ, MC, and staff.

What was your experience like organizing events in Brazil?

It's a great opportunity for the entire 3x3 community and we will continue to host pro events, improving more and more each time. It was an incredible experience hosting a Challenger in Saõ Paulo, being in contact with the best athletes in the world and at the same time testing our national athletes. Novi Sad (SRB) won in 2015, Rio Preto (BRA) in 2016, and Piran (SLO) in 2017. It was amazing. Do you have a favorite event that you have organized?

As I said, there are more than 200 events and it’s very difficult to choose my favorite. It’s even harder because 3x3 events are held in iconic places around the city. We’ve been inside the mall in São Paulo and on Santos beach, making for incredible images, as 3x3 should have. But, I enjoy the Quest Finals and the Challenger events a lot, which are more intimate compared to the World Tour events.

How has the 3x3 game grown in Brazil since you were a player? How has it grown since you joined the ANB 3x3?

We have great players, and the game has evolved a lot since I was a player. There are always new players coming to 3x3 and new talents are emerging. ANB 3x3 is trying to increase participation by attracting players with more competitive tournaments, especially for the U18 and U23.

Are there any programs for youth to get involved in 3x3?

Yes, we are working hard on that. Before the coronavirus pandemic, we opened a 3x3 training center to prepare new athletes for competitions starting with 13-years-olds. We also made 3x3 festivals in schools and public places as well as using social media to engage with younger audiences.

How would you describe 3x3 to a person who has never seen it? Why do you enjoy the format and the style of play?

I would describe it as a game with a lot of emotion in a short period of time. It’s a fast and very dynamic game, very physical and intense. I like this style of play because it's more exciting, the moves are fast, and the constant counterattacking. The teams don't have time to celebrate each time they score as they have to quickly move on to the next possession. You don't stop running until the game is over. It's a 10-minute sprint.

Do you think 3x3 will continue to grow in Brazil and why?

For sure. 3x3 will continue to grow in Brazil firstly because we work really well together with CBB. There are many competitions being held and we now have a new 3x3 training center. Basketball in general continues to grow in Brazil.