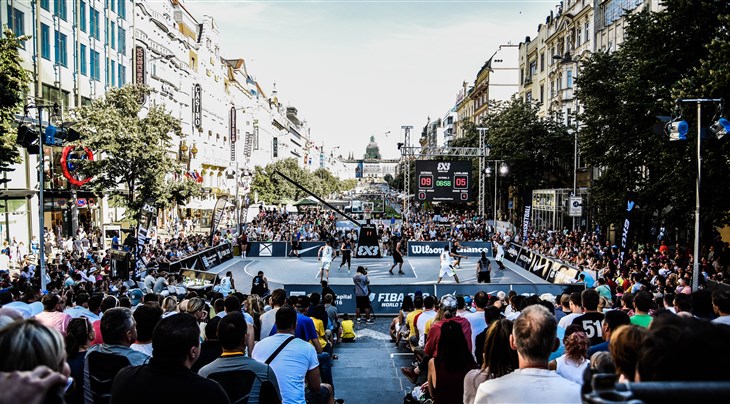 The Czech Republic capital has become a popular destination on the World Tour with games played in the heart of Prague's New Town - part of the historic city center which is a UNESCO World Heritage Site.

The mesmerizing location is the perfect site for fast and furious 3x3, which has magnetized the young generation of Czechs ever since the first World Tour event in Prague seven years ago.

"The first World Tour was a celebration," Czech Basketball Federation (CBF) secretary general Michal Konečný said. "Many players from the (Czech basketball) national team came to watch the new discipline. The tribune on Wenceslas square was totally full, it was so nice to see."

During the London Olympics one year earlier, Konečný quickly understood the potential for 3x3 and realized Prague was an ideal World Tour location. "We started cooperation with FIBA in London and organized an international tournament inside the Czech (Olympic) house," he said.

"From this moment we believed that 3x3 is the future and we wanted to be part of this evolution. Prague suited because it is a very nice historical city, but also had youth who loved sport." CBF has organized a FIBA 3x3 World Tour Masters every year since 2013, the longest active streak, not only by a national federation, but by any organizer in 3x3 history.

Not traditionally a hoops powerhouse, the Czech Republic has made strides in recent years highlighted by an impressive quarter-final run at last year's FIBA Basketball World Cup in China. Many national players have also taken to 3x3 furthering the expose of the 21-point game.

"3x3 has already found many fans in the Czech Republic," Konečný said. "Many basketball players play 3x3 during the summer. The COVID-19 pandemic has stalled everyday life worldwide, but Konečný remained hopeful two-pieces and dimes would once again be a flavor of the Czech summer.

"We plan to do eight events and a final this year," he said. "Unfortunately, because of restrictions, the format will be 12 men's and 8 women's teams for each tournament."

3x3 in pretty Prague isn't too far away in what should serve as a much needed tonic in these grim times.