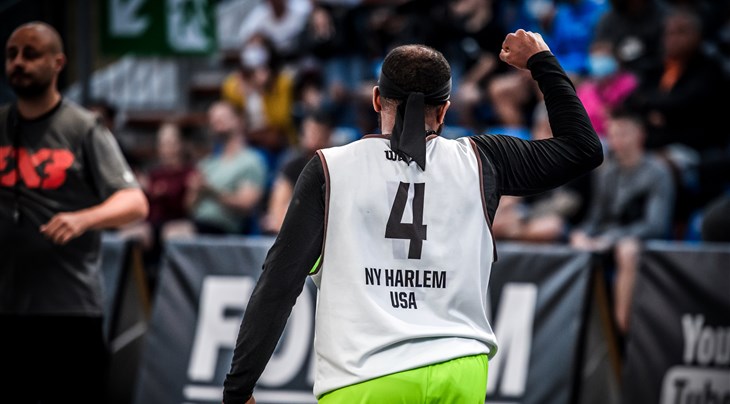 So much could go wrong for the number 4 team in the world in a pool of death with the 6th and 7th ranked team, Sakiai (LTU) and Piran (SLO). The New Yorkers responded with 2 wins before the limit (21-17 and 21-15 respectively). The number one player in the U.S. Dominique Jones aka 'Disco Domo' was in party mood (13 points, 5 key assists in 2 games) but it was his teammate Joey King, who topped all scorers on Day 1 with 17 points. The former University of Minnesota star also ranked second overall in rebounds (12).

If we hadn't led on them in the preview, we probably would have given Novi Sad (SRB) the headline. To be fair, their pool was on another level but just 2 days after a disappointing Debrecen Masters, the Serbs came back hungrier than a UFC fighter after the weigh-in. Only thing you have to know is they set the 2 best marks for Tissot Fastest Game on Day 1. Novi Sad transformed the 10-minute sprint into a 6-minute dash. The Ulaanbaatar MMC Energy (MGL) game was over at 5'53". Humpolec Bernard (CZE) lasted a few seconds more (6'19"). The number 1 player in the world Dusan Bulut was good (12 points). His teammate Marko Savic shined even brighter with 14 points and 7 key assists, some of them soooooo smooth.

Ub (SRB) also had a perfect record and managed to spend even less time than Novi Sad on the court as Debrecen (HUN) had to forfeit their second game due to injuries. But in just 1 game, the Serbian team formerly known as Vrbas caught our eye by beating the number 3 team in the world Riga (LAT) (21-16)

If you had to watch just 1 game from Day 1, check out Liman (SRB) vs. Jeddah (KSA). The main draw opener was a nail-biter, which ended with fireworks from behind the arc. One year after playing hero in the final of the Debrecen Masters 2019, Maksim Kovacevic killed it again in Hungary. He had a game-high 10 points and hit the Tissot Buzzer beater from behind the arc in overtime. Good news: both teams ended up qualifying for the quarter-finals. These are the teams that tomorrow will play the knock-out stage of this #3x3WT Hungary Masters 2020 🇭🇺 ✨ pic.twitter.com/o2H7i5DTO0

Fans can watch the livestream on youtube.com/FIBA3x3, follow the exclusive coverage on all @FIBA3x3 social media channels and join the conversation with the official hashtag #3x3WT.