Mongolia and 3x3: first the Olympics, then a women's pro team 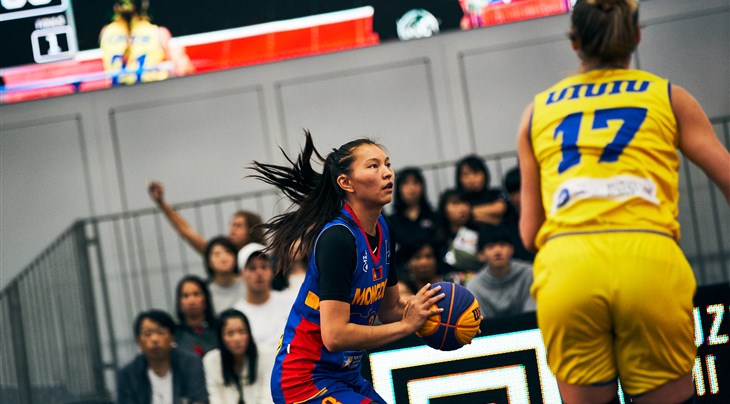 ULAANBAATAR (Mongolia) - As sports continue to return around the world, Mongolian fans were treated this weekend with the return of the 3x3 league, which began last November. After months of inactivity, the 12 best men’s and women’s teams came together to finish the season, including a women's team which turned professional after earning their ticket to the Tokyo Olympics, a first time for Mongolia in a team sport.

“It was really good to be back on the court playing 3x3 because I really missed it. It was a really great experience for sure,” said 3x3 Mongolian rising star Khulan Onolbaatar.

The event was extra special because it was the grand opening of the new 3x3 arena, the first of its kind in Mongolia.

"The arena was packed with people because everyone missed 3x3 basketball as we did. Everyone was starved for good competition and the crowd was really into it for the final games. I really missed it."

Onolbaatar was not the only member of the family to have a winning day. Her brother, Enkhbaatar Onolbaatar, the 7th ranked men’s Mongolian player, also finished as a champion with Sansar MMC Energy.

"The highlight of the tournament was that my brother won the Super finals in the men’s category… It was a sweet moment for our family. To win the whole thing with my brother and stand there with two gold medals, taking pictures, that was really a great moment for us."

In the final, Onolbaatar and her UB Amazons 2 teammates defeated their namesake senior team, UB Amazons 1, 21-11. It was the first time that they had defeated them in three tries, part of a perfect 5-0 record for the event.

"We have been preparing for the last six months and we told each other to go out there, have fun, play our best, and play really good defense. It was a great feeling to win the whole thing."

Khulan Onolbaatar is a member of UB Amazons, an 8-person team that is the first professional women’s 3x3 team in Mongolia. They represent the best 3x3 women’s talent in the country and include members who will represent the country at next year’s Olympic games.

We are a family with an ambition to introduce Mongolia to the world. A family that aims to unite Mongolia with its joint efforts and pride. Yes, we are a 3x3 basketball family, a new generation of young people✊✊✊. Thank you to everyone who supports us. @ 3x3Mongolia @FIBA3x3 pic.twitter.com/EtOXLRWGCR

After earning the MVP honors as a Freshman at the Mongolian College Basketball Association competition, Onolbaatar was spotted by the UB Amazons coach and asked to join. She was invited to train with the team and try out, finally earning a spot.

"I tried out and it worked out I guess, she said with a laugh. “It’s been three years strong."

Onolbaatar was also part of the squad that appeared for her country at the FIBA U23 World Cup 2019. Mongolia would finish 6th out of 20 teams, a tremendous accomplishment.

"It was the highlight of my basketball career. Being able to play on that court and represent my country and showing people that we might only have 3 million people, but we can ball out too. We left it all on the court. We can’t wait for the next U23 World Cup."

As a player, Onolbaatar has big goals for the future.

"Representing my country on the biggest stage possible is my personal goal. I want to get better, help my teammates, and improve every day."