Lithuania's Hoptrans 3x3 starts with a bang, Juventus Uniclub with a win 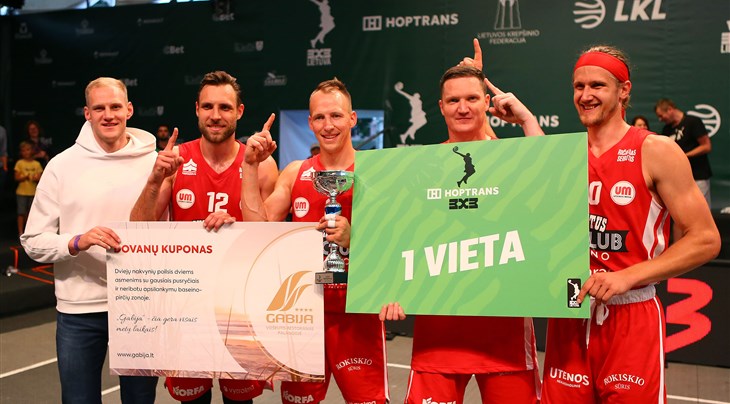 There was a lot of anticipation around the event, which featured no less than 3 Olympians, some of the best professional basketball players in Lithuania and many familiar 3x3 faces.

One of them stood up in a big way: 28-year-old Darius Tarvydas - who won the FIBA 3x3 World Tour Lausanne Masters in 2015 and won bronze for Lithuania at the FIBA 3x3 Europe Cup 2014 - led Juvents Uniclub to an undefeated run in Stop 1.

Airlines ✈️ @BCJuventus have won the first Stop of this #HopTrans3x3 Series after defeating Tauras in the Final Game 🏆🔥 pic.twitter.com/1sIZbxR0Rs

Tarvydas finished second in scoring in Palanga (35 points), only trailing the event's number one attraction Jonas Maciulis, who had 42. For his first big 3x3 event, the 3-time Olympian did not disappoint. He showed athleticism, great range and incredibly soft touch on his turn-around jumpers to bring his Taurus squad all the way to the final.

"The emotion was good. It’s just the first weekend, so we are happy of course, but the job is not done. The key to the win was team play and just playing 10 minutes of our game. That was the key to the game," said Tarvydas following the win.

Day 1 brought some world-class highlights you only find in 3x3, including Benas Bagdonavicius’ dirty crossover that went more viral than your favorite meme. The ankle-breaker made it to ESPN Sports Center, Bleacher Report, House of Highlights, etc.

Nutmegs, crossovers, video-game-like handles, and more were on display in front of an excited crowd in Palanga.

Juventus Uniclub heads into Stop-2 of the Hoptrans 3x3 tournament with 100 tour points. Tauras, which came in second place, received 80 points, while Šakiai, the most experienced 3x3 team in the field, earned a third-place finish and 70 points. Check out the rest of the standings here.