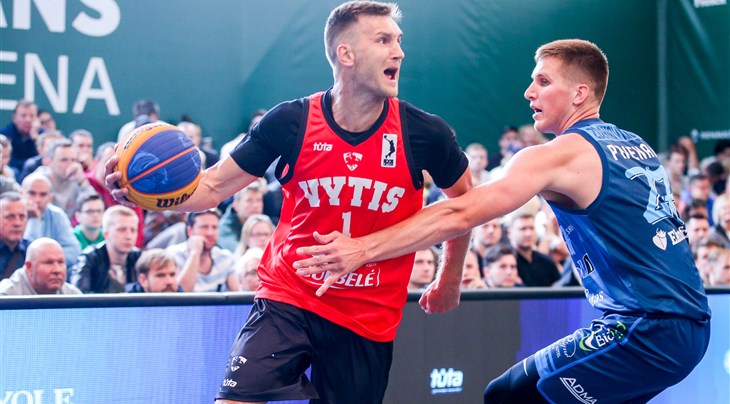 PALANGA (Lithuania) – The #6 3x3 team in the world Sakiai Gulbele (LTU) will be looking for their first title during Stop 3 of the Hoptrans3x3 - a qualifier to the FIBA 3x3 World Tour - on July 17-18.

The foursome of Paulius Beliavicius, Aurelijus Pukelis, Marijus Uzupis and Sarunas Vingelis won a bronze medal repping Lithuania at the FIBA 3x3 Europe Cup last year and is by far the most experienced squad in the field.

Paulius Beliavicius, the 3rd ranked 3x3 player in Lithuania, has been on fire so far, scoring 37 points over stop 1 and 2, good for 11th best in the tournament.

For Beliavicius and his teammates, the experience has brought on some added pressure.

"There was a bit of pressure because the media had been speculating if we’re going to win because we’re playing against basketball players. We didn’t say anything before the tournament. We just practiced, worked hard, and we’ll need some time to get into our best shape."

Sakiai spent 3 months doing just that, practicing with Taurus, led by the 3-time Olympian Jonas Maciulis. Beliavicius isn’t surprised that Maciulis has been stuffing the stat sheet (he leads the competition in scoring) after weeks of practicing with him.

"Jonas has played with the best basketball teams in Europe. He adapted really well – he just needed a few training sessions and it felt like he had been playing 3x3 for years. He’s very dedicated to basketball. He’s a real professional and sportsman, so I didn’t expect otherwise. "

So far, it’s been total domination from Juventus Uniclub, the winner at both stops 1 and 2. They are currently in the lead with 200 tour points while Sakiai is in second place with 150 points followed by Maciulis’ Tauras in third place with 140 points.

"Before the tournament when I saw the team rosters, I knew Juventus was going to be one of the top four teams. We played against them before at the Lithuania 3x3 Quest and I know all of the players really well so it’s no big news to me that they’ve played good."

When you try to sneak into a party but the security guy catches you 😤⛔ #Hoptrans3x3 pic.twitter.com/sLY296a5RN

Halfway through the event, Beliavicius and his Sakiai teammates acknowledge that they have to step up in the competition. They know all the ins and outs of the game but preached patience as they get back into shape.

After Stop-1, I think we were playing really bad. After we watched the games and talked about strategy, it helped with our performance in Stop-2. I think and hope our team will do really well in Stop-3 and the Stop-4. To play our best in the last stage is our main goal."

So far, the Lithuanian basketball fans have lived up to their stellar reputation. They’ve packed the house and brought passion and noise to the court. People have been watching outside on a big screen and you can find the games live on television.

"Lithuania is crazy about basketball. Now, 3x3 is getting so much more popular because the tournament organizers are doing a great job with media, TV broadcasts, social media, and many people are now watching 3x3. I love that new people are really excited to watch. The atmosphere is really good."

Beliavicius also sees a lot of players that can make an impact on the 3x3 World Tour in the future.

"You can have at least five teams (from the tournament) go to the World Tour Masters right now. They understand basketball. They just needed time to adapt to the rules, the refs, and they are getting better each game."