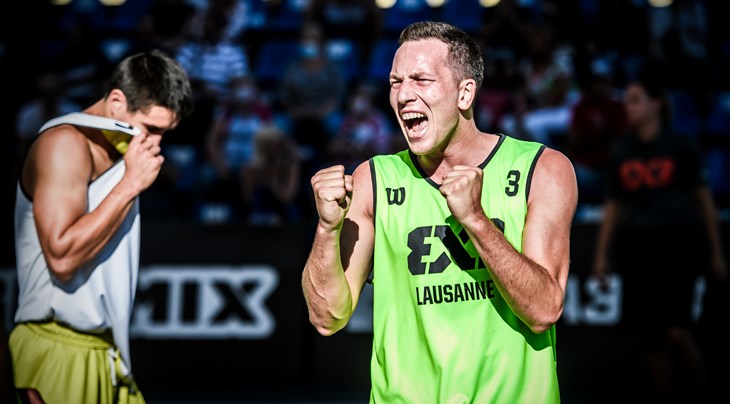 The 14th team in the world Lausanne continued to play well in Debrecen for the return of the FIBA 3x3 World Tour. Just like Tuesday at the Hungary Masters, the Swiss team once again beat Liman (SRB), the number one team in the world, led by 9 points courtesy of the marksman Marco Lehmann. But unlike 3 days ago, Lausanne followed up with a second W to secure a spot in the quarter-finals on a Tissot Buzzer Beater from long range from Westher Molteni. Molteni and Gilles Martin combined for 17 points in the win against Ulaanbaatar MMC Energy (MGL).

King Wes 👑 with the @TISSOT Buzzer Beater 🚨 to advance to the knock-out stage #3x3WT pic.twitter.com/hvY8uUvrxb

Two more teams had a clean sweep on Day 1:

Riga vs. Piran (SLO) was an absolute nail-biter and the Slovenians had 2 game points from behind the arc in the last seconds. But the Hungary Masters MVP Karlis Lasmanis was clutch in the money time. He took Anze Srebovt one-and-one and buried the step-back just inside the arc. The man known as 'Batman' and his 'Robin' sidekick Nauris Miezis both had 6 in the game.

Somebody is working hard to win the MSP award 👀 #3x3WT @marcel.esonwune These are the teams that tomorrow will fight for the championship in this #3x3WT Europe Masters 2020 🔥🔥🔥 pic.twitter.com/KKHpG6KHL5

Fans can watch the livestream on youtube.com/FIBA3x3, follow the exclusive coverage on all @FIBA3x3 social media channels and join the conversation with the official hashtag #3x3WT.