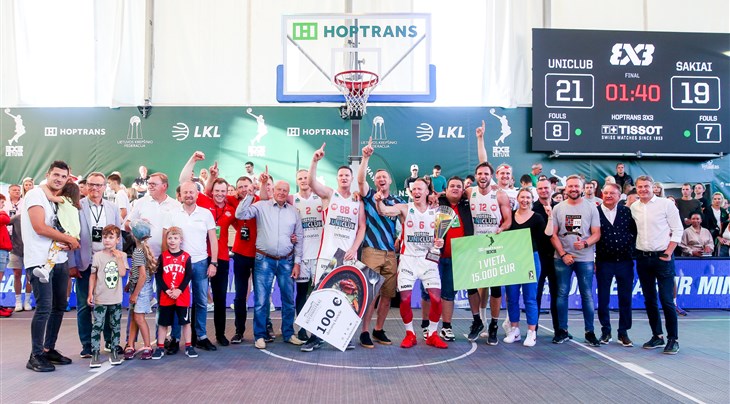 PALANGA (Lithuania) – It was a collision course from the very beginning. The two best teams at Hoptrans3x3, Juventus Uniclub, and Sakiai squared off in the final in front of a packed house, as Uniclub lifted the trophy, took home the €15,000 purse, and earned a FIBA 3x3 World Tour spot.

In the final round, Uniclub put on a dominating performance in Pool A, winning all three games before the 10-minute clock expired. Sakiai continued their workmanlike performance through the field, winning all three of their Pool B games. Both teams earned automatic bids to the semi-finals where they dispatched their opponents.

The final lived up to all expectations. Juventus shot out of the gate, but Sakiai, the 6th ranked FIBA 3x3 team in the world, came back strong. Over the final 7 minutes, it was an absolute slugfest, with both powerhouses going back and forth, no lead safe for more than a few seconds.

In the end, the talent of Juventus Uniclub was too much. The 3x3 newcomers won 21-19 and earned their spot in the World Tour

Darius Tarvydas - who led his team in scoring and finished 2nd overall in the final event behind 3-time Olympian Jonas Maciulis (Taurus) - was named tournament MVP after fittingly scoring the final basket to secure the title.

The third-place game took place between Lietkabelis and Siauliai. Lietkabelis led end to end in an absolute thriller, winning 21-18. Siauliai stormed back after a slow start and missed several chances to tie the game at the end in front of an exhilarated crowd.

Fifth place went to Tauras, led by Jonas Maciulis. The team also produced one of the plays of the tournament, a monster slam from Sarunas Beniusis.

THAT WAS VICIOUS @sarunas8 🤯😳 #hoptrans3x3

In the return to 3x3 basketball, the fans showed their true passion throughout the month, bringing the noise and providing that unique 3x3 atmosphere.

Re-live all the Hoptrans 3x3 action and watch all of the stops on the FIBA 3x3 YouTube Channel.