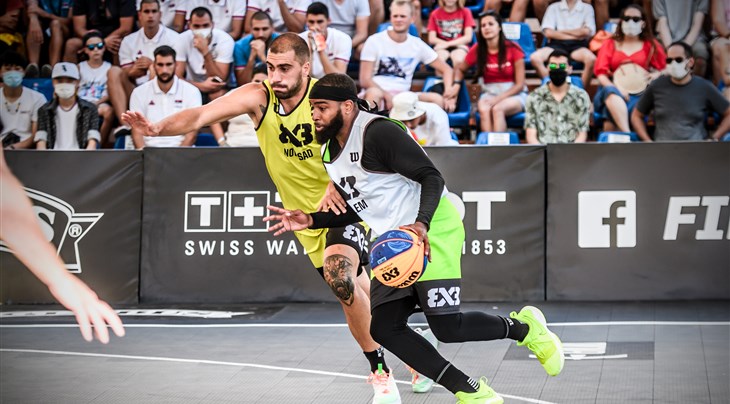 NEW YORK (USA) - NY Harlem star and number one U.S. 3x3 player in the world Dominque “Disco Domo” Jones joined The Olympic Channel podcast known as "The Corner" with Tom Kirkland and Sam Friedman to talk about his 3x3 basketball journey, working with youth in his community, and his Olympic dreams.

Jones, known for his sweet moves on the court, also has a day job at Rising Ground, a juvenile justice program in Brooklyn, New York, as a development specialist. He works with local youth who have gotten in trouble and are working to get back into their communities.

"We try to give them a good perspective on how not to end up back in the facility. Hopefully, these things stick when we talk to them and teach them how to be responsible."

Jones, who grew up in Harlem, NY, is no stranger to the temptations and poor choices that are available to young people. "I had a lot of good people in my circle, a lot of good people around that were influential in my life. It really took a village. They all helped me in different ways."

Basketball became an outlet for Jones, who worked very hard from a young age to sharpen his skills and rise amongst his peers.

"It wasn’t easy, but I’m happy with every part of my journey."

He became a gym rat at a young age because he knew he needed to overcome his lack of size. "At 5’9’’ (1.75m) I’m small compared to the other guards. Everybody wants those big guards and I wasn’t the most athletic, I wasn’t dunking on anybody. I was trying to perfect my craft where I can be unguardable. It took a lot of no’s for people to tell me yes, so I use that as motivation."

That perseverance paid off as Jones is one of the most prolific players on the 3x3 court. In 2019, he was named the 3x3 World Tour MVP, an honor that he cherished from the fans and his fellow players.

"I appreciate everybody. The players showed me a lot of love, and vice versa. There are a lot of people who could have voted from players from their countries so the respect that everyone gave me was amazing. I worked very hard for it. 2019 was a big breakout year for our team (NY Harlem)."

NY Harlem won their first Masters in Lausanne in 2019 with Jones taking MVP honors. "To finally get that World Tour victory was a big hump off our back and we look forward to many more."

With his pro team playing well, Jones also has his sights set on the Olympics, which he had been preparing for before COVID 19 forced the delay of the event. Now, he and his teammates will be starting from scratch, getting physically and mentally ready to qualify.

"I’m grateful to be part of the qualifying team. Our main goal is to get to the Olympics. Once we get there, the rest will figure itself out. I’m going to keep preparing, getting my mentality strong. 3x3 is a game of IQ, knowing all the rules and strategies to help your team. Making these first Olympics with 3x3 would be epic for us."

It is such an honor that @usab3x3 @usabasketball is trusting me with such a monumental position to make history for our country. I am so grateful and excited for this opportunity !! Dreams money can’t buy 🥇🇺🇸🥇#EverythingforGrayson #roadtotokyo2020

In order to earn that gold medal, he will need to get past some of the game’s best players, including Dusan Bulut, the Serbian maestro, known as "Mr. Bulletproof". As the number one player in the world, he has Jones’ respect through and through.

"Dusan Bulut is an amazing player. He’s earned that number one spot by putting in the work and leading his team. It’s always competitive when we are on the court. It’s all respect to him and he earned that number one spot. He is a legend not only in 3x3 but in his hometown. Without him, a lot of these things wouldn’t work. He’s taken the game to new heights. His winning ways are inspiring."

When it came time for Tom and Sam to give Jones some rapid-fire questions, the New York native was quick on the trigger with his answers.

He picked Michael Jordan over LeBron James to start. "Much respect to LeBron but Jordan brought a different aspect to the game.” He also picked New York over any city in the world. “When it comes to food, fashion, or basketball, we have the best of everything."

For the true New York battle, Knicks or Nets, Jones went with the boys from BK. “I really want to say the Knicks, but they let you down so much,” he said with a laugh. "It takes a lot for me to say this, but I have to go with the Nets right now."