Jennings styles on and off the 3x3 court 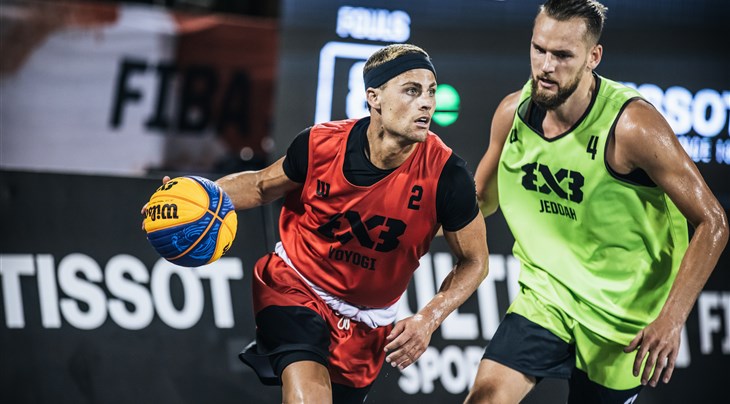 TOKYO (Japan) - The FIBA 3x3 World Tour has been home to top-level American players since 2012. For years, the likes of ‘Disco Domo’ Jones and Kareem Maddox have stood out as some of the best on the tour and have earned spots representing the red, white, and blue on the international stage.

But, beyond the household names, there are other Americans who are representing the flag abroad

One of those players is Spencer Jennings, a member of the Japanese 3x3 team Yoyogi Crayon.EXE, which made their Word Tour debut at the recent Doha Masters.

“I ended up playing 3x3 in Japan about four years ago when I reached out to the .EXE League (Japan) to try and get a contract with a team. The Okinawa team was the only one to get back to me. Then I found my way to Yoyogi Crayon which is located in Tokyo.”

Since joining the team, he and his teammates, including fellow American Ryan Tana, have had a great deal of success in the EXE, winning the 3x3.EXE PREMIER JAPAN 2020 CUP in October.

While Jennings continues his quest for success on the 3x3 circuit, he always does it in style. On the court, you’ll always find him with a headband or arm sleeve, an ode to some of his basketball idols growing up.

“Looking good for me on the court is very important. I wouldn’t say I try too hard at it, but I’m always aware of making a good appearance on the court,” he said with a smile. “I grew up in the culture where Allen Iverson was a big role model, seeing him wear the headbands and the arm sleeves. I try to put my own spin on it while paying homage to him.”

Off the court, Jennings also has an eye for style. He has worked in modeling and makes sure to work out every day to keep up his physique.

“I look a lot at fashion, but I don’t go too extreme… I try to make sure my clothes are fitted nicely and that I keep my good posture and try to carry a certain elegance about myself. Roger Federer is a good role model for that.”

One of the reasons Jennings has taken such a strong liking to FIBA 3x3 is the flexibility that it has given him as a person and a player. This means the opportunity to travel the world, while also being able to focus on his other passions.

“I think it’s much better for my lifestyle. 3x3 provides the opportunity to create your own path, create your own vision of how you want to play the game. Teams are smaller so you can have a greater bond with each other.”

This also translates to his own style of play.

“There are a lot more ways to be creative in yourself (with 3x3). With basketball, you need to reflect the image of the team, but with 3x3 you have more ability to create something that is unique and individual to yourself.”

You can find Jennings’ personality throughout much of his social media, sharing updates from his fans as he navigates through the 3x3 world.

“Social media is important. It’s a great way to be connected. I try to keep a balance between real life and social media and not getting too caught up in what other people are doing, and just try to give inspiration to others about what I’m doing and not get consumed by it.”

For anyone who has followed him, you know the man likes to look sharp, and he’s laser-focused on his goals… and his love for big cats. You’ll often find posts containing the “eye” and “leopard” emojis a symbol to show his concentration and drive.

“I put the eye and cheetah emoji because it’s the eye of the animal, the spirit of the animal. It’s a way to say I’m focused, I’m locked in.”

For anyone who’s looking to make sure they are playing and at the top of their game, Jennings shared his five tips to looking your best on the court.

Following their 9th place finish at the Doha Masters, Jennings and his teammates took the first set in their World Tour journey, but far from their last. Like everything in life, he has taken this experience as a learning opportunity and hopes to come back stronger.