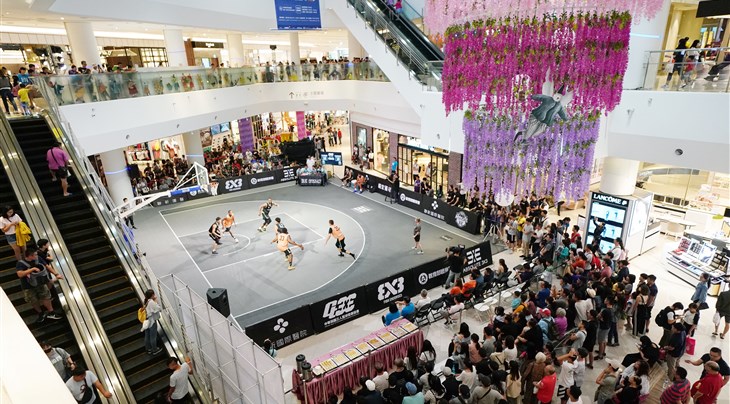 Huang has organized 3x3 Challengers since 2017 through Absolute 3x3, which is part of his Forebest Marketing Company. The events have been praised for consistently delivering high-quality spectacles for the audience on site and online.

The passionate Huang is a firm believer in 3x3's growth and magnetism for youth. "It's entertaining, competitive and really can excite the fans," he said. "People here like to join big activities, big festivals.

"We would like to make 3x3 events have more connection with local people so that they can't wait for the tournament to travel to their city.

"Taichung City saw the opportunity for the event to promote the city," Huang said. "We also have plans to build up Taichung City as a '3x3 city' for not only Chinese Taipei but the world."

Huang's vision has grown ever since he first became curious about 3x3 in 2012. "I remember that one day I saw 3x3 news on FIBA's web page and I wrote an e-mail to FIBA asking how to become a promoter," he said.

"The very first FIBA 3x3 tournament we were invited to was the FIBA 3x3 Word Tour Vladivostok Masters 2012 in Russia. It was the first time our players played with official rules.

"We really got a big shock in those two days because the game was fast, physical and really exciting."

3x3 has a rich tradition in the country and is popular at the grassroots. "3x3 has been around (in Chinese Taipei) for about 30 or 40 years ago," Huang said. “I think we have hundreds of local 3x3 tournaments a year." The coronavirus crisis has thrown everyday life in tumult globally, but Chinese Taipei has fortunately been less impacted than many other nations fueling hope for 3x3's return in the coming months.

"We will organize some grassroots tournaments," Huang said. "But the most important event for us is the 3x3 EXE Premier league, which we joined this year. It was planned to start in May, but will run in July."

Huang's insistence to host 3x3 events for women also played a significant role in Chinese Taipei rising in the FIBA 3x3 Federation Ranking and clinching a spot in the FIBA 3x3 Olympic Qualifying Tournament, which has been rescheduled to 2021.

Chinese Taipei has emerged as an exciting 3x3 location and Huang, undoubtedly, can't wait to get back to organizing big events to a hungry fan base.

"I do want to have more international events to let our players and fans watch the high level games," he said. "It's important to help us develop 3x3 here.

"Every 3x3 event is important for us no matter if it is big or small."