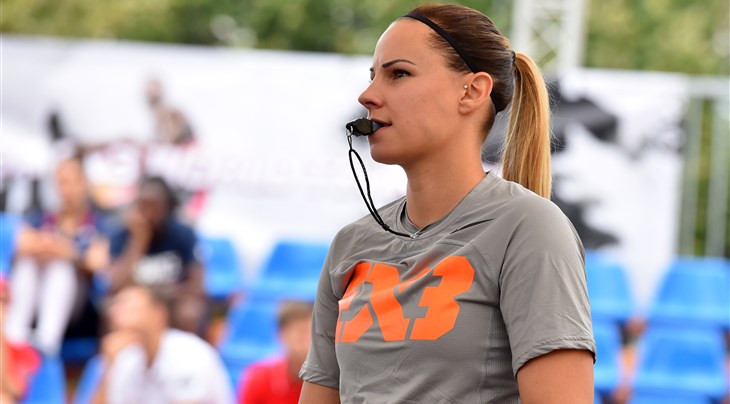 BUDAPEST (Hungary) – An emotional Cecilia Toth broke down after finding out that she was selected to referee her first major 3x3 tournament.

It was tears of joy for the passionate Hungarian, who has become a highly respected ref on the circuit since her breakout at the FIBA 3x3 U23 World Cup in China two years ago.

"At the U23 World Cup I thought 'okay that was a one-time thing Cecilia. Give your best, maybe you will never have a chance to officiate a huge tournament like this again so enjoy but give your best'," Toth said.

Relishing being on the big stage, she proved to be far more than a one-hit wonder. Toth became in high demand highlighted by officiating the men's final of last year's FIBA 3x3 Europe Cup in Debrecen.

"To get a chance to officiate the final was the best feedback I could get," she said. "I remember only a few days after the final, I realized that I was the one who refereed the gold medal game. It took like two days to realize what had happened to me.

"The 2019 summer was a miracle. From one dream to another I was living my best life."

Toth had originally become a basketball ref but was asked by the Hungarian Basketball Federation to give 3x3 refereeing a go given her background. The 30-year-old first played 3x3 in 2012 and became a mainstay player for Hungary, who she represented at the 2014 and 2016 World Cups. "My federation called me and said that they can send one ref to Lipik, Croatia, for a referee licensing camp," she recalled. "They thought that since I was a player in 3x3 why don't I go and try to get a license. It was a huge honor and without hesitating I said yes."

Toth has immersed herself in the craft and meticulously studies footage of previous tournaments, while also participating in webinars to continue to improve as a ref.

A challenge has been ensuring players and fans understand the rule around illegal screens, especially in pick and rolls, but she hasn't encountered any lingering hostility, even though refs can often be unfairly maligned in sports.

It underlines the special camaraderie that exists in 3x3 between players, officials and fans.

"I love it (refereeing) because I can meet a lot of people from all over the world," she said. "I need to be able to work with them on and off the court and at the end of the tournament we become a family. Even some players greet us like friends." Tóth's quick rise up the ranks has made her a mentor for young refs and, naturally, a role model for females entering the cauldron of officiating. "I truly hope more and more female referees are coming, not just in 3x3 but in every sport," she said.

"My advice for female referees is to be strong, work hard and to be humble and self-confident."

"And never be afraid to ask questions."