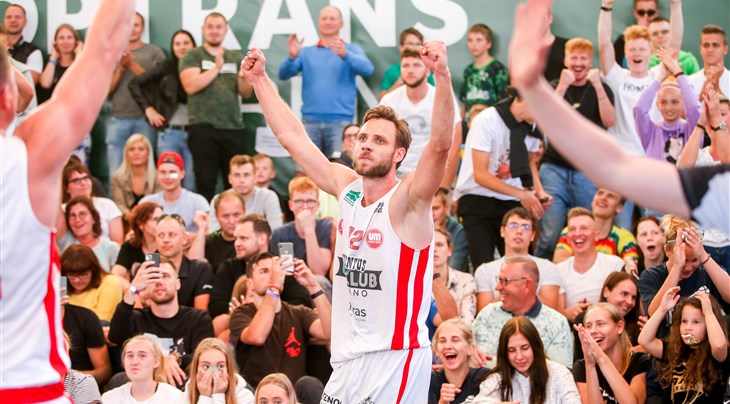 PALANGA (Lithuania) – You can take the man out of FIBA 3x3, but you can’t take 3x3 out of the man. It’s been a few years since Darius Tarvydas dominated on the 3x3 court, but this past weekend, the 28-year-old showed why he is worthy of the highest praise in the format.

On Saturday, in front of a packed Hoptrans Arena, Tarvydas and his Juventus Uniclub teammates took home the top prize at the Hoptrans3x3 event in Palanga, Lithuania.

“The tournament was great. It was well organized, the level was high, even from the players who never played 3x3 before. All of the players got better throughout the tournament and every game was tough. It was a big celebration to play this tournament in Lithuania all month long. It was a great win and a great experience. The MVP is just a bonus. I am really happy with the team winning. We prepared a lot.”

It was the return to 3x3 basketball after a long layoff that forced players into their homes. Upon returning to the court, Tarvydas admitted there was a lot of work to do.

“We started preparing at the end of May. We did a lot of work with the coaches to prepare physically and then 3x3 practice to understand the ways to play. We prepared for a month like that. After that, we went to the local Lithuanian 3x3 championship. We were still finding our game with the hope of succeeding at the Hoptrans event.”

Beyond the court, the Juventus Uniclub coach, Zydrunas Urbonas, made sure to talk to Tarvydas and Gintautas Matulis to learn more about the 3x3 game and how best to structure the team and set them up for success.

“Throughout this whole process, our coach was searching for information, talking to other coaches and in the end, he helped us a lot to prepare for the games and to fix the mistakes we made in the game.”

For Tarvydas, 3x3 experience was key. He has not played 3x3 since 2016, but before that, the Lithuanian achieved a great deal of success. His most notable achievements came at the FIBA 3x3 Europe Cup 2014 (where he won bronze) and at the 2015 WT Lausanne event which he won with Vilnius. Now, he has earned a spot back on the 3x3 World Tour at the Debrecen Masters on August 29-30.

“I already knew what to expect, the physicality of the game. Of course, it helped a lot. Here (in 3x3), there is no time to rest. I really like it because it is nonstop action.”

His experience was also important against the tournament's most accomplished and experienced team, Sakiai, the 6th ranked FIBA 3x3 squad. Juventus faced Sakiai in the final during three stops, including the final, a developing rivalry that the fans enjoyed watching unfold.

“It was a great final. I hope the fans enjoyed our rivalry. Sakiai is a great team. I’m sure they will do well really well in 3x3 and I hope we have a chance to play against them again.”

With a World Tour spot on the horizon and the promise of more 3x3 basketball to come, Tarvydas is impressed with the way the 3x3 game has grown since he last played.

“Before, it was a lot more one-on-one. Now, you have to have a really good relationship with your teammates, and you have to understand each other. That’s the key to winning the game. The level of individual play and the team game is totally different.”

So, what made Juventus such a good team at Hoptrans3x3? Tarvydas believes it was all about their work before the first bounce of the ball.

“It was about our preparation. Juventus club took the preparation seriously and during the season we have a physical coach and doctor who takes care of us. We also have great players that match well with this style of basketball. Every player has his own strength, we have great chemistry and I think those are our strongest areas.”

With a title under their belt, the sky is the limit for Juventus Uniclub as they continue to go for 3x3 glory.