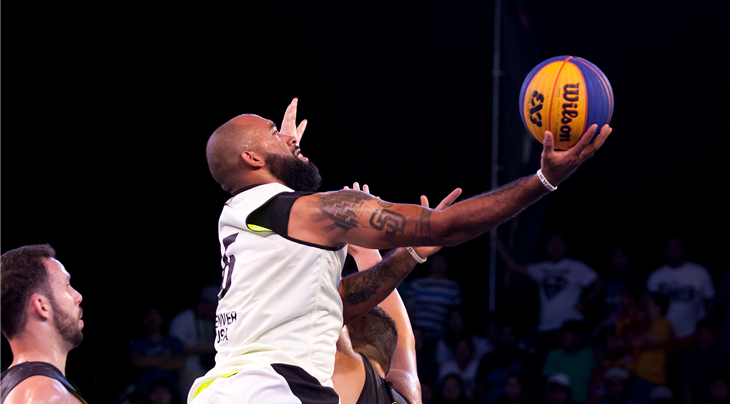 If you've discovered 3x3 in the last couple of years, you may have never heard about Corey Campbell. But in the first 3 editions of the World Tour, the 6ft 2in (1.88m) sniper was one of the best players in the game. With his Team Denver, he won the New York Masters back in 2012 (on an unforgettable Buzzer Beater), was the top scorer at the Chicago Masters in 2014 and participated in 3 World Tour Finals (2012, 2014 and 2015). He's also one of the very few players who can say he's undefeated against Dusan Bulut and his Novi Sad team (2-0).

Always calm and poised even when he was catching fire on the 3x3 court, he also had a very underrated sense of humor, like when he tricked the FIBA 3x3 Media Team into thinking the official nickname of the other Denver star (Derek Griffin) was the 'Vanilla Gorilla'.

We called Corey to discuss an event where his team did not exactly shine (they were eliminated in the quarter-finals - to be fair they were played without a sub after Derek Griffin had to be sent to the hospital with a kidney stone). Individually speaking though, Corey set a scoring record, which still stands 7 years later. FIBA3x3.basketball: So, 19 points in that 2013 game. What do you remember most about going off that day?

Corey Campbell: I just remember we had flown in almost the same time as the Philly team that we played in that game, and I remember us, you know, bringing it in, trying to be nice. One of their players, he just kept staring at us, didn't shake our hand or anything and so I was like alright well I guess this is just how we’re going to have to play this. So, I was hoping we got to play them, and once I saw the schedule that we were playing them, I don't know, I just got really excited. I think the first play of the game Derek (Griffin), the other scorer on our team, rolled his ankle real bad and so we decided I was just going to shoot everything and it just so happened that I just had one of those days where I just thought I couldn't miss. I think I did some shots off the backboard and everything and everything was just going in.

Would you consider this one of your best offensive performances of your entire basketball career? What was your mentality coming into the tournament? Did you consider yourself pretty even with the rest of the competition?

We were actually going in with the thought process we were going to win it all because we knew it was going to be physical and we knew the San Juan team was going to be one of the top teams, but some of the other teams we didn't really know about. Like, the Canadian team [Saskatoon, who eventually finished 2nd at the World Tour Final that year], I know they were one of the top teams but that was our first time seeing them. But, our mentality was that we were going to go in and win it, but we had a whole lot of bad luck. I think my teammate, also the one that rolled his ankle, the night before, he had a kidney stone, so we already knew he wasn't going to be able to do much. We basically were going into every tournament thinking we were going to win it because we shot a lot of twos so any day that we get hot like that we feel like we could beat anybody.

As the game started you hit a shot or two. At that point did you get into that zone and say, alright I'm not really going to miss very much this game?

That’s what I figured even after I hit the one off the backboard. I just figured it was going to be one of those games. As I was hitting shot after shot the crowd start getting louder and louder and then my teammates started getting more hyped and they were even like, go ahead and shoot everything, don't pass anything. Were the guys trying to get you on one particular defender? Maybe that one guy who was staring you down? Or did he end up guarding you during the game?

No, we didn't hear much from him during the game after I hit a few shots, so I guess we kind of shut him up a bit.

What would you say is the biggest difference in the way you approach the game as a scorer in 3x3 versus basketball? When you were playing defense, did you feel like you were taking any plays off or with 3x3 you really can't even though you were doing so well on the offensive end?

This was your 3rd World Tour event, in 2013. You also played in 2012 in New York and Miami. Having been one of the first people to really launch with 3x3, what is your impression of how the game has grown since you first started playing?

It's grown a lot more than I expected. When I first started out, I thought like ok, this is cool. I thought it was going to be like a short-term thing, but year after year, (I thought) like this could be a big thing. I wish we would've got started when we were younger because I think we were close to 30 once we started. I didn't even imagine it being this huge. Do you have any particular game during your career outside of this one that stands out?

I'll probably have to say our first one in New York. I hit the game-winner against the Puerto Rican team of San Juan to win the championship game. That was probably one of the best times that we had.

What does it mean to you to have one of the single best scoring games in 3x3 history?

That means a lot. We had so much fun playing 3x3 and the FIBA guys and everybody has always treated us very well. For us, being one of the teams that started the whole thing out, it means a lot, but you know, records are to be broken. It was truly an honor.