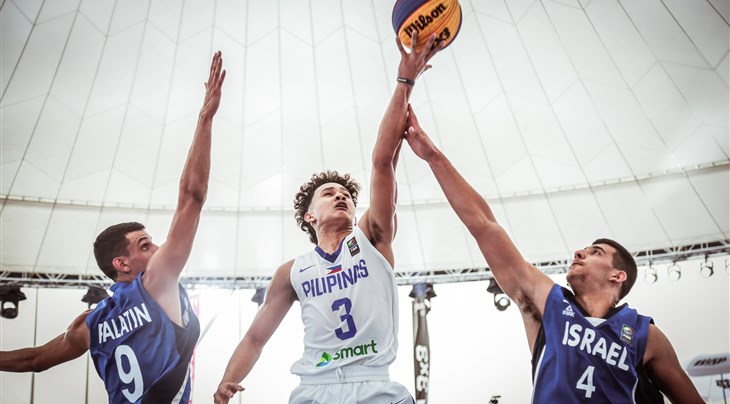 MANILA (Philippines) - The man with the luxurious hair Juan Gomez de Liano is back on the 3x3 court at the Chooks-to-Go Pilipinas 3x3 President's Cup.

The 20-year-old has become a basketball star in the college ranks in the Philippines, representing the UP Fighting Maroons. But, Gomez de Liano first came to basketball prominence on the streets of Manila. Everywhere he went, there were half basketball courts where he would learn the game.

"I was introduced to 3x3 basketball when I was 8 or 9 years old. I would play 3x3 with grownups; I grew up playing in the streets. You see everyone in the streets. They won’t be playing basketball. We’re playing 3x3 and that’s the OG."

Gomez de Liano, aka Mr. Swish, had his first experience with FIBA 3x3 at the FIBA 3x3 U18 World Cup 2017. The Philippines performed well, winning three of their four pool stage games, eventually finishing 7th overall. It was the return to a playing style he knew quite well.

"It was very positive. Coming into that tournament (the U18 World Cup) I remember there weren’t high expectations for us. We finished 7th but that I was a great experience being able to compete at a high level."

It was the first time he had represented the Philippines on the 3x3 international stage, an honor he cherished when given the chance.

"It was truly an honor. I look at it as a blessing. Not a lot of people have had this opportunity, so I never take things for granted. I really wanted to make my fellow citizens proud, which I think we did."

Gomez de Liano is set to make his return to the 3x3 court this October, for the Chooks-to-Go Pilipinas 3x3 President's Cup, a 12-team event that is taking place in Laguna, the Philippines, from October 19 to October 30. The event will take place at the Inspire Academy and will require all players to enter the “bubble” after COVID testing and quarantining. This will be the first professional event for the new 3x3 league and will be livestreamed on youtube.com/FIBA3x3.

When given the chance to play, it was a no-brainer for Gomez de Liano. "I love playing in 3x3 tournaments. It’s one of the first tournaments since the lockdown and I was given the opportunity to represent my team. I told the team that I had been playing 3x3 my entire life and I just want to bring a championship to my club."

The tournament will be welcomed by a nation that has been starved for basketball. While players such as Joshua Munzon and Alvin Pasaol, the top two 3x3 players in the Philippines will be playing, Gomez de Liano is still coming in with a winning attitude.

"We joined this tournament with one mindset; to win."

Gomez de Liano will be playing on Nueva Ecija, a team with little 3x3 experience, except maybe for team leader Gabriel Banal, who played in 2 challengers last year. He believes that their shooting and basketball acumen will help them challenge to be on the best teams at the tournament.

"We’re a smart team. We lack size, but we can shoot the ball and we’re all smart players. We know how to play with each other, we’re very versatile, and we can all create for ourselves. Nobody is selfish in the group and it’s really something I’ve been looking forward to."

With his return to the 3x3 stage ahead of him, he has a desire to continue playing in the format in the future.

From the kid playing basketball in the parks with no shoes to the biggest 3x3 stage in the Philippines, Gomez de Liano has 3x3 in his blood.