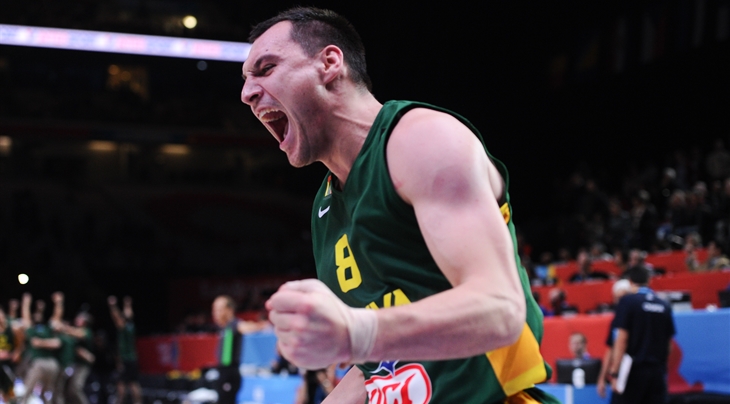 PALANGA (Lithuania) - Lithuanian basketball star Jonas Maciulis has represented Lithuania in 3 Olympics. At age 35, he might have found the perfect way to do it for the 4th time. With 3x3 basketball. Maciulis has made a name for himself in basketball playing leading Lithuania to 2 FIBA Basketball World Cups (bronze in 2010), 5 FIBA Eurobaskets (silver in 2015) and back-to-back-to-back trips to the Olympic Games in 2008, 2012 and 2016. He was named the Lithuanian Player of the Year in 2015.

When Mindaugas Spokas, general secretary of the Lithuanian Basketball Federation, came to Maciulis with the opportunity, he didn’t hesitate to join on.

Heading into the tournament, he will enter the world of 3x3 for the first time since he was a teenager. Thus far, he has been working his way back into shape following a several months-long layoff.

Thus far, he has been working with the members of Sakiai Gulbele, which is currently 6th in the FIBA 3x3 Team ranking and who won bronze at the FIBA 3x3 Europe Cup 2019 representing Lithuania.

"We are practicing every day and they are introducing me to new things, telling me what I need to know about the rules and strategies. I’m trying to learn."

While Maciulis has spent his entire career as a basketball player, he does have amateur experience playing 3x3.

"Years ago, when it is was an amateur sport, when I was 17, 18 years old, I played with my friends. Back then there weren’t as many opportunities during the offseason to train. So, we made a team, totally amateur… I played it many years ago and that was when I was first introduced to it."

He’s also been keeping his eye on the 3x3 game through social media. "I’ve become familiar with 3x3. I’ve watched a bit on YouTube and highlights on Instagram".

As 3x3 enters the Olympics for the first time, Maciulis expressed the pride and honor it was to represent Lithuania in international competition. "In Lithuania, representing your country in basketball is the biggest honor you get to earn as an athlete. Every kid who starts playing basketball at 6 or 7 years old dreams of representing Lithuania. This is a big honor not just for you but for your whole family. Everybody feels honored."

The possibility remains of him joining the Lithuanian 3x3 National Team as well. While he is new to the format, he admits that everything remains a possibility.

"I always say I’m not quitting basketball yet, but we’ll see what happens. I’m keeping in mind this opportunity and I’m waiting to see what opportunities come in my direction. Anything can happen as I prepare to keep playing."

You can watch Maciulis' 3x3 debut at the Hoptrans 3x3 tournament this Friday on Youtube.com/FIBA3x3.