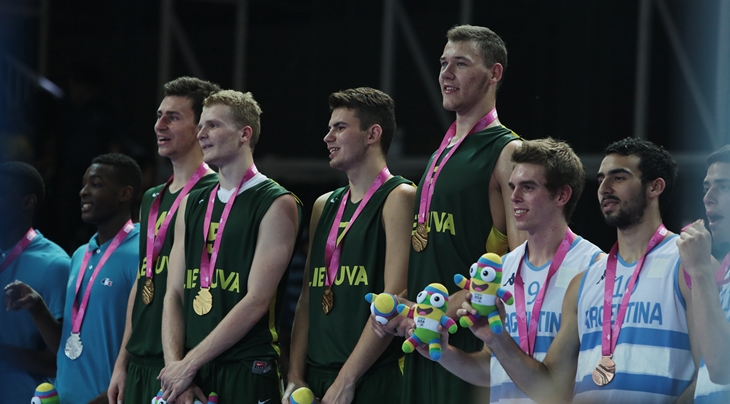 PALANGA (Lithuania) - In 2014, Jonas Leksas wrote history by winning gold at the 3x3 event of the Youth Olympic Games in Nanjing. Six years later, he's still writing 3x3 history... for Basketnews.lt, one of the largest basketball websites in Lithuania. We caught up with him a few days after the ending of the Hoptrans3x3, a FIBA 3x3 World Tour Qualifier which found great success in Lithuania this summer.

So how did the 2014 Youth Olympics gold medalist find himself as a journalist instead of a player? Leksas (2nd from right), celebrating Lithuania's incredible buzzer-beater win against France after the final of the 2014 Youth Olympics

Leksas started his 3x3 career in 2006 and went on to represent Lithuania at both the FIBA 3x3 U18 World Cup 2013 (where they knocked out USA and reached the semi-finals) and the 2014 Youth Olympic Games, where he won gold. That Olympic final had one of the most memorable finishes in 3x3 history, with a buzzer-beater from Kristupas Zemaitis to seal it (Zemaitis also played for Nevezis during Hoptrans3x3).

"We won the gold medal. Now I have this big achievement. I’m a Youth Olympics gold medalist."

Despite all of his early success, Leksas’ career would be cut short due to injuries to his back and ACL.

"After that, I knew I was not going to be a professional basketball player, so I had to come up with a plan B."

So, Leksas went to law school. During his fourth year, he was given the opportunity to write for basketnews, the biggest basketball website in Lithuania.

"The experience in basketball, playing for 15 years is a big advantage. I feel like I have a lot of skills talking about basketball."

So far, plan B is going very well for Leksas, who graduated with a master’s degree in law, but will continue his journey as a sportswriter.

“Being a journalist, I feel more comfortable and it’s like a hobby, to talk and to write about a sport, which I’ve loved since I was a child.”

He brought those writing skills to Hoptrans3x3, where he had nothing but high praise for the event over the past month.

"The level of the tournament was really high because the tournament also had players who are basketball stars in the Lithuanian Basketball League. Before this tournament, 3x3 was not very popular in Lithuania, but after it, many people say it changed their mind about the format."

Leksas sees a bright future for 3x3 in Lithuania, if the passion for the tournament was any indication.

"In the final tournament (stop) in Palanga, there were 600 people in the arena and another 500 people outside."

He has enjoyed continuing to play 3x3 basketball at the lower levels, hoping for another shot at a master’s tournament.

"I’m still playing basketball, but it's more for fun because I have had an ACL injury and a lot of problems with my back. In 3x3 basketball, I still play at a quite good level and it would be nice one day to reach a World Tour Masters. We also thought it would be interesting to play in a tournament such as Hoptrans 3x3 with our Youth Olympics team and see if we still can ball at the highest level."

As a player, Leksas continues to fuel his passion for 3x3 basketball, and through his work, he hopes to bring the best possible coverage to Lithuanian fans.