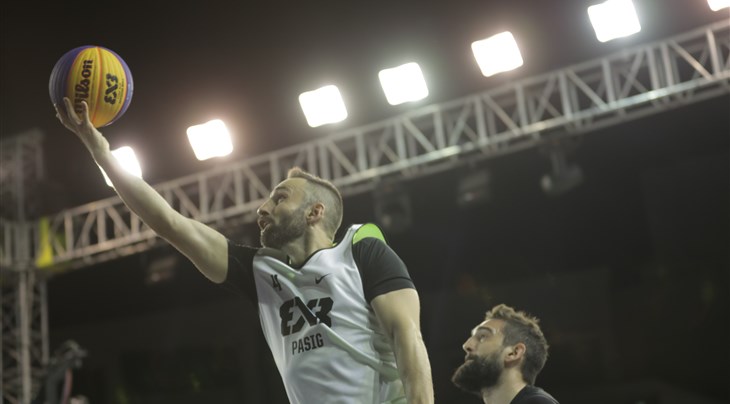 PARIS (France) – There are few players in the last five years who have had a more eclectic basketball resume than Angelo Tsagarakis aka 'The Tsar'. In addition to playing professionally for five different European basketball teams, the 6ft 3in (1.90m) sharpshooting Frenchman has been a stalwart on the French 3x3 national team and a player to watch whenever he has the ball in his hands.

Coming in the FIBA 3x3 World Tour 2020 season, the 36-year-old is looking to continue playing at a high level.

"All of my training is done to have the highest level of cardio I can possibly have so I can sustain playing 3x3 at the highest level. I always want to be competitive and sharp. My whole focus right now is the World Tour because it’s a 10-minute sprint."

That 3x3 dream started very successfully back in 2015, winning the French Open, the country’s premier 3x3 event, and then a couple of weeks later, playing with Team Paris at the 2015 Prague Masters. They defeated Dusan Bulut and Novi Sad on their way to a third-place finish.

He wouldn’t play again in the World Tour until last year in Doha, playing with the Philippines side Pasig, finishing 5th.

Since he first began playing in 2015, Tsagarakis believes 3x3 has grown for the better.

"The main difference is that you just have greater teams. Teams became better and more professional. Nobody gets on the World Tour by accident. You need to be truly involved in 3x3 to be able to have such an opportunity. FIBA did an amazing job of growing the product. It’s a true circuit with big events. It’s major."

With the level of play at an all-time high, Tsagarakis is back with Team Paris, looking to continue their winning ways on the World Tour. "Team Paris is my baby. It’s my creation from the get-go. All the guys on that team are going to be recruited by me,” he said with a laugh. “I’m a general manager-player until maybe I retire for good."

Coming into The Europe Masters 2020, Tsagarakis expects to compete at the highest level.

"Any competitor wants to win, no matter who is he playing against or how high the competition. We definitely have the talent to compete with anybody. There’s not going to be one easy game. It’s going to be fantastic. It’ll probably be the highest level Masters that we’ve seen so far. All the teams are hungry and have been missing competition. It’s now or never."

Coming into the World Tour, there may be no team hotter than Team Paris. Winners of this month’s 2020 French Open (though with different personnel), where Tsagarakis was named the Finals MVP.

"It was beautiful. It’s the toughest competition ever. You’ve never seen that much talent and high-level players altogether."

That talent included the best French 3x3 national team players like Kevin Corre, Dominique Gentil, and several current and former members of the basketball French National team such as the shifty Andrew Albicy.

"The obstacles we had to face for us to get that trophy, there’s no comparison to the previous years. There was so much talent in this tournament. The satisfaction of such victory and getting back onto the court, it’s hard to describe it. It’s like man, finally. Winning is always a beautiful feeling."

While he savors these winning moments, he decided to step away from the 3x3 national team (with whom he won bronze at the FIBA 3x3 World Cup 2017) in January of 2019. For him, it was about choosing to walk away from the game and not the other way around.

"Being the one in charge of the decision-making when it comes down to playing or stopping is more so about leaving at the top knowing that I’ve achieved pretty much everything that I wanted. I’ve had accolades individually, we found great success as a team, and being a pioneer of the sport in France, I felt like I did my part. I didn’t want anybody to dictate the narrative when it came to my career." There is a new generation of 3x3 basketball players that will now grow in Tsagarakis’ shadow, and he is ready for them to take over. This includes 2 of his teammates in Hungary: Raphael Wilson (who won silver for France at the FIBA 3x3 Europe Cup 2019) and stretch big Rémi Dibo, who memorably caught fire last year in Puerto Rico to send France to the FIBA 3x3 World Cup.

The soft-handed and soft-spoken big Hervé Touré will complete the new-look Team Paris.