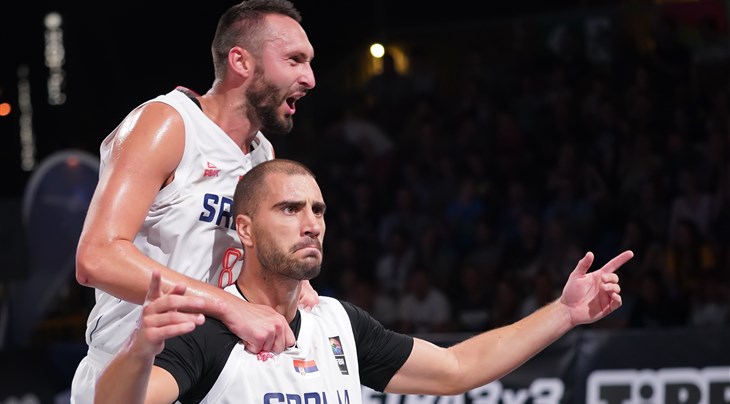 MIES (Switzerland) - 2020 is, thankfully, almost over and we made it through this most difficult of year with an exciting shortened FIBA 3x3 World Tour.

But 2021 - fingers crossed - will be brighter and there is much to look forward to in 3x3, which will come back harder than the beat on Dákiti.

Here is what's ahead next year.

If you're like us, you've been waiting for that moment like the release of Soul on Disney Plus! From May 26-30, 40 teams (20 in each gender) from 36 different countries will compete in Austria for six tickets (3 per gender) to Tokyo.

These teams have been dreaming about this moment for a long time and were distraught when this year's tournament was postponed in the early stages of the Covid-19 pandemic. The players will be extra hungry and will give it their all in a bid to make history and be part of 3x3's Olympic debut.

The tournament will be played in Austria - the emerging 3x3 country's first official FIBA 3x3 competition - and it will be built around a green and sustainable concept.

Like its most famous citizen, Arnold Schwarzenegger, Graz will be all action and entertainment in May.

The tournament will be followed by the Universality Olympic Qualifying Tournament in early June with 12 teams (6 per gender), who have not yet made it to the Olympics and have not been represented in Basketball (irrespectively men or women) in the past 2 editions of the Olympic Games.

As a reminder, this reflects one of 3x3’s missions to bring basketball to countries, which are not traditional basketball powerhouses.

Are you excited? You better be because history will finally be made when 3x3 makes its Olympics debut in Tokyo in August.

Everyone was crushed when the Olympics was postponed this year but the wait will be worth it!

A refresher of the teams who have already qualified - men's: Serbia, China, Russia and hosts Japan; women's: Russia, China, Mongolia and Romania.

3x3 will be launched on the biggest stage in sports where all eyes will be glued to this fast and furious spectacle. For many, it will be their glimpse of this explosive hoops discipline and the secret we've known for many years will be out. And you know our theory about 3x3. It's like a box of Pringles: "once you pop, you can't stop". Expect the comments section of our Instagram account to get really crowded in 2021. We have greatly missed our Zone Cups - where the best countries in the region are pitted against each other. There is extra spice in these contests with neighborly battles always serving extra heat.

Australia dominated the Asia Cup in men's and women's in 2019 but will their stranglehold continue in 2021? Or will New Zealand, Mongolia, China and Japan have other ideas?

In similar fashion, Egypt ran away with the Africa Cup, while powerhouses Serbia (men's) and France (women's) claimed the Europe Cup trophies.

Beautiful Paris will be the perfect site for the return of the Europe Cup next season. Can't wait!

Sadly, the Women's Series was unable to be played this season due to the Covid-19 pandemic. Most of the participants also play basketball and were not able to resume past August, when things really kicked off for the World Tour. It was a bitter pill to swallow after the remarkable debut season in 2019, which was the first-ever FIBA 3x3 competition dedicated to women and where each team represented their national federation.

To recap, the 2019 edition consisted of 15 events and two teams stole the show - France who won six titles and four-time champs Canada.

Superstars emerged, including world No.1 player Laetitia Guapo from France, the one-two Canadian punch of the Plouffe sisters and the irresistible Bec Cole from Australia.

We've missed them all but the good news is the Women's Series will return in spectacular style in 2021.

Our favorite players just can't wait to get back on the circuit.

10th edition of the World Tour

We should consider ourselves lucky - at least the FIBA 3x3 World Tour was partly salvaged and there was still some unbelievable moments in this shortened season.

But 2021 promises to be a return to a full season as the World Tour criss-crosses the globe once again. There will be more events than ever before - and that means even more craziness! It is also the 10th edition of the World Tour, so it's going to be extra special and even emotional.

There are numerous questions waiting to be answered.

Are Riga the new kings of 3x3? Can Liman respond after their World Tour Final heartbreak? Are Novi Sad done or will they once again defy the critics? Are Utena Uniclub set to take the World Tour by storm after a dazzling debut season?