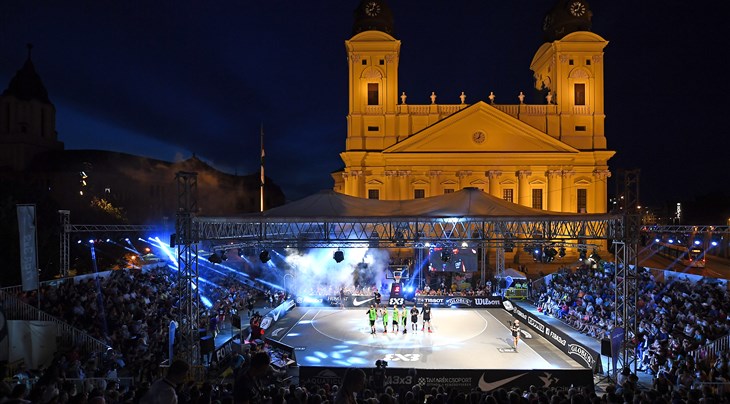 DEBRECEN (Hungary) – The FIBA 3x3 World Tour Debrecen Masters 2020 is the first FIBA official competition since FIBA suspended all its competitions due to the COVID-19 outbreak on March 13, 2020.

Twelve teams will compete in the first Masters of the season on Saturday 29 and Sunday, August 30, 2020.

"After 5 months, it is great to finally see our players take the court", said FIBA Secretary General Andreas Zagklis from Debrecen where he met with local authorities and 3x3 players. "It will be an opportunity for all 3x3 fans to watch their favorite players again and for all other fans to discover our fast-paced urban basketball discipline, which will make its Olympic debut next year."

The pinnacle of the 3x3 professional circuit – the FIBA 3x3 World Tour – is back for 3 consecutive Masters, which will all take place in the second largest city in Hungary (the latter two, replacing Bucharest): Debrecen Masters (August 29-30), Hungary Masters (September 1-2) and Europe Masters (September 4-5).

Players expressed their satisfaction to be back on the 3x3 court and came in numbers: 13 of the Top 15 teams in the world (21 in total) will compete in these 3 Masters in Debrecen, including Novi Sad (SRB) and the number one 3x3 player in the world Dusan Bulut, who have won 4 of the 8 previous editions, including the last 2.

All the health and safety measures requested by local and national authorities and the Guidelines for the Return to Basketball, developed by the FIBA Medical Advisory Group (MAG) will be implemented.

Games start on Saturday, August 29 at 11.15am local time (GMT+2). The knock-out rounds of the Debrecen Masters - culminating with the final - will be played on Sunday, August 30 from 2.50 to 7pm local time.

Click on the teams below to see the rosters of the Debrecen Masters:

Fans can watch the livestream on youtube.com/FIBA3x3, follow the exclusive coverage on all @FIBA3x3 social media channels and join the conversation with the official hashtag #3x3WT