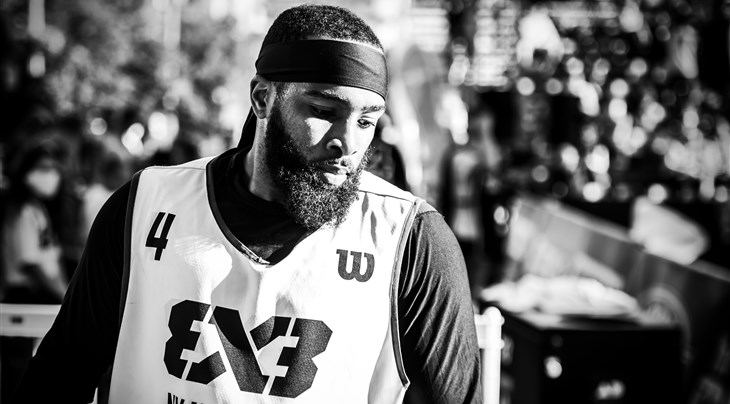 NEW YORK (USA) - Not even COVID-19 could stop last year's FIBA 3x3 World Tour regular season MVP Disco Domo Jones from making his return to the 3x3 court. The NY Harlem star competed in Debrecen but not before months of waiting, personal loss, and a tremendous travel schedule to make it to Europe. We sat down with Jones to talk about the delay to the World Tour season, how he has overcome the difficult time, and what the return to the court means for him and his teammates.

As the reigning World Tour season MVP, what was your reaction when FIBA announced the suspension of events and that the season might be canceled?

I was so disappointed. I was actually preparing to go to the (Olympic) qualifying tournament with Team USA. I was so excited, and we were out in California working out, working hard, getting together, and building chemistry with the guys. When we found out that everything was canceled, nobody expected it to be this long. I thought maybe we’ll reconvene in 2 or 3 weeks but as the months and months piled on and the restrictions and quarantine, I was highly disappointed because I was preparing for basketball mentally and physically. It was kind of tough and depressing. The fact that I was around my son all the time, that was the only bright spot for me. I got to spend time with him and see him walk and be there for his first words and things of that nature so that was the only blessing during the quarantine. But I definitely missed basketball and getting back into it. 3x3 has been a bright spot in my life for the past 5 or 6 years since I started, so the suspension of everything was a bit of a downer.

When you saw you had the possibility to play 3 events in one week, what was your reaction?

My reaction was, I got to get ready fast. I had to get the guys together, trying to get things right because with 3 events, and all the top teams, you have to be on your A-game. You can’t slack at all. There were a lot of restrictions in New York. Thank God we decided to do it (the WT) in the summertime so you can have outside workouts and things of that nature. I was so happy that it was back. We missed it, the fans missed it, and we were just looking forward to getting back to it.

When the team received the news was anyone hesitant or was everyone all-in?

I was all-in by any means possible. Our team manager helped us so much with everything behind the scenes. She found us a place to get COVID tests, organized plane tickets, and I was just overwhelmed. I just wanted to get back to the game. Even with the procedure and everything to get out here it's all worth it. I've been looking forward to it for so long it was all worth it.

Was there any point you thought we're not going to make it?

With the COVID tests because in New York we had a higher rate, it wasn't a priority to get the lab results back. We had to pay people to expedite our process and things of that nature so as long as we got it, we were happy. It was no question that I was coming. We had to come, that wasn't an option for us. Our fans missed it, we missed interacting with our fans, and we just missed playing the game and competing. We missed that so much.

How many COVID tests did you take before coming to Europe?

7 before I got here, and I think I'm on my 8th or 9th one if you count the rapid tests. That's all in a span of two weeks. That's not even the ones I took before we found out we were playing. I’m just trying to stay safe and get through this. We had to go to a couple of places just to see if we can get the test results back. We built a relationship with the people to get the fastest results, so it was a blessing.

What was the feeling like getting the team back together?

It was amazing. We've been locked down for so long and we wanted to get after it. Getting the guys together again, it’s like a brotherhood, we missed it. When we got back together, we were straight back to business, but it was good seeing each other because we miss each other. It's bigger than basketball for us. We are all brothers at the end of the day so that was big for us.

Did you have any (COVID) cases close to your family or friends?

I had a lot of close friends that passed away, unfortunately. I was just being a support for them, and we honestly didn't know the beast in which we were dealing with. This has been the first real virus that has affected me and my close friends and seeing different people hurt by it and the lives lost. So just taking it day by day and trying to stay strong for the people around me trying to find every bright spot possible.

Are you playing for those friends and family?

Jones: For certain. I had a lot of people that supported me that passed on and people that missed the game. I have had the opportunities that I have so just being out here and competing at a high level and being seen all in different countries, I'm inspiring a whole lot of people. I get a lot of texts and emails and face times from different people and they tell me they’re proud of me so I just want to keep putting on and keep making my people proud and try to find every bright spot possible I can.