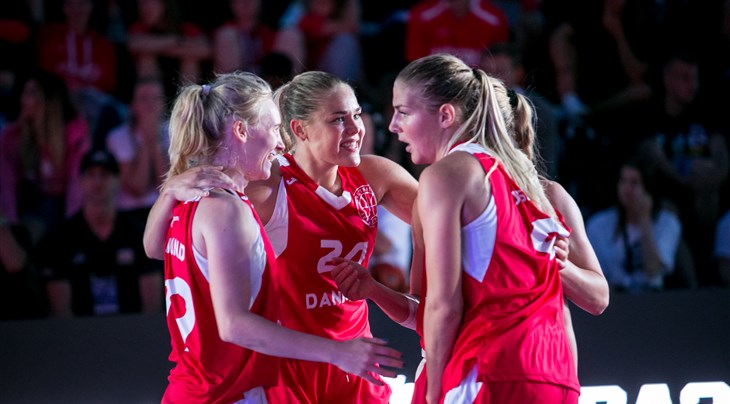 COPENHAGEN (Denmark) – After memorably beating Sweden to qualify for their first ever FIBA 3x3 Europe Cup in 2019, Denmark women's star Maria Jespersen vividly remembers the reaction from her shocked compatriots back home.

"Really? How? We qualified?" – was the general sentiment relayed to Jespersen, who was the hero in her team's overtime victory at the FIBA 3x3 Europe Cup 2019 Ukraine Qualifier with a short turn-around game-winner.

Denmark is a proud Scandinavian country renowned for its talents in various sports, most notably football, handball and tennis. But the small nation has little history in hoops.

"Denmark never qualifies for anything in basketball really. It's a super super small sport in Denmark," says Jespersen, who grew up playing tennis and idolizing former world No.1 Caroline Wozniacki.

There was natural intrigue after Denmark's historic performance at the FIBA 3x3 Europe Cup Qualifier in Ukraine. And it was another prime example of 3x3's ability to go beyond borders and make inroads in non-traditional basketball terrain.

HISTORIC: 🇩🇰 Denmark qualified for their 1st-ever #3x3Europe 🏆 after @mjespersen12 hit a clutch turn-around J in OT vs Sweden. pic.twitter.com/U390fstOMY

"Most people (in Denmark) don't even know what 3x3 is," the 26-year-old says. "In the whole calendar year, there is one game shown on national TV back home. Actually having these games on TV is a big deal."

Denmark's thrilling 12-10 victory over Sweden was the perfect game to attract new followers. The Danes were in a big hole early and trailed by six points before Jespersen helped inspire a comeback for the ages – and a celebration to match. "When we finally won the game and everything was over, I was just ready to collapse right there on the floor," she says. "Amazing experience and sometimes I go back and just watch it because it was a really nice feeling."

Despite being the 12th seed at the 3x3 Europe Cup in Debrecen, Denmark were not intimidated and showcased their sudden improvement with a highly impressive 15-11 victory over the Europe Cup 2018 runners-up Netherlands.

They were unable to advance out of the pool stage but the encouraging performances caused a stir in Denmark. "We blew it up on social media," Jespersen says. "I can't stress enough how big a deal it is for us (to qualify for the 3x3 Europe Cup), not just for us as individuals or as a team but for the whole basketball society in Denmark."

Becoming 3x3 pioneers has become special for Jespersen and her teammates, who have big dreams for the future. An Olympics berth for basketball minnows such as Denmark always felt improbable but the advent of 3x3 has many countries recalibrating their prospects.

"Coming from Denmark, you never ever thought that the Olympics would even be an option if you're a basketball player," Jespersen says. "It's been a dream and all of that but it's always been so distant that I didn't even really think much about it.

"We played big games in college or in our personal clubs, but this is different. You're doing it for Denmark.