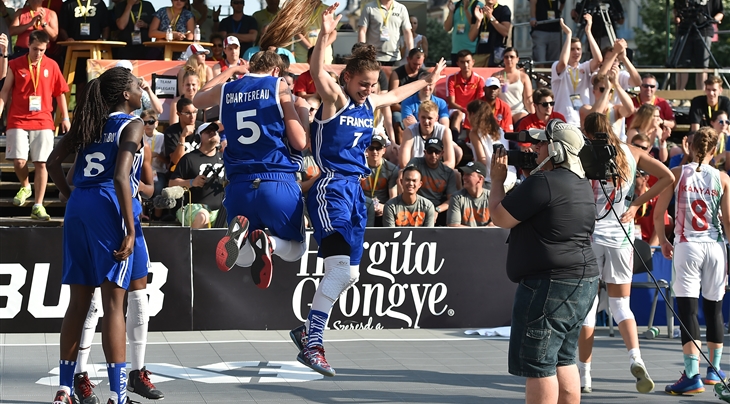 PARIS (France) - France's stirring upset over powerhouse USA at the FIBA 3x3 U18 World Cup 2015 continues to inspire Alexia Chartereau, who told 3x3ffbb.com the improbable triumph has gained greater recognition in the years since.

Heading into the decider in Debrecen, Les Bleus were major underdogs against the three-time defending champions led by Arike Ogunbowale, who has become one of the WNBA's brightest young stars.

But France received a spark before the match through a pep talk from their coach who believed the Americans were overconfident.

"Just before the final, there was the dunk competition and we were focused and not watching the competition," Chartereau told the French Basketball Federation website.

"I remember that our coach said 'you see, the Americans are seated. They watched the dunk competition and did not warm up. They do not respect you'.

A fearless France pulled off a thrilling 20-19 victory with the then 16-year-old Chartereau hitting a key late basket to help clinch an upset for the ages.

"It was a close match and in the end we managed to gain the upper hand because we were not afraid of them and we played eye to eye," she said.

The Lisa Berkani-led team had arrived in Hungary unfancied but their fairy tale tournament started a golden run for France's youth women’s sides.

"We arrived without too many goals," Chartereau said. "We just knew that we had a physically and technically strong team, and that we were going to take the matches one at a time."

The 21-year-old has become a member of France's national basketball team and won a silver medal at last year's FIBA Women's EuroBasket 2019. But the memories of Debrecen continue to motivate Chartereau, who is proud of France being at the forefront of 3x3's rise into a global phenomenon.

"It has always been an honor to be a 3x3 world champion, but perhaps people realize a little more now of what we have done," she said. "3x3 has grown so much over time that I find this title has gained more value and importance.

"The result we obtained in 2015 also allowed us to start something new and launch a new era for 3x3." The 1.90m (6ft 3in) forward believed the fast and frenetic 3x3 helped develop her game during those pivotal formative years.

"I realize now that 3x3 has brought a lot in my game," Chartereau said. "You have no choice but to take initiative (in 3x3). You cannot wait to do something, you are forced to create the game. That is what's great.

"It has served me well in basketball."