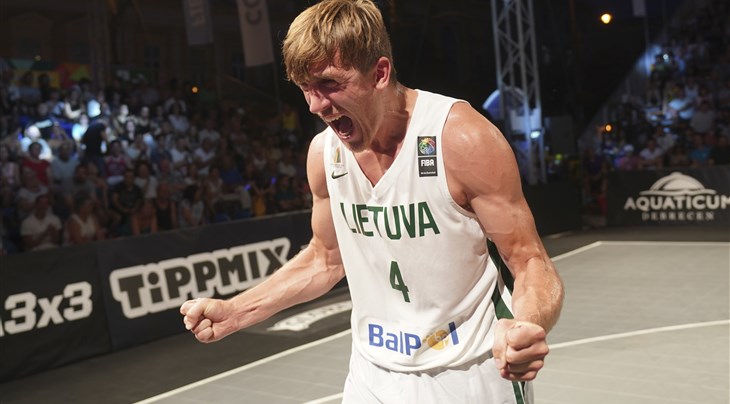 PALANGA (Lithuania) - The return to live basketball will come in the form of 3x3 in Lithuania following a unique partnership between the federation, league and 3x3 association.

"It definitely is a historic partnership. Many professional basketball players will play in an official 3x3 competition for the first time which we have not seen in Europe. Also, everyone is really excited to be back on court after the lockdown," said Rolandas Skaisgirys, one of the Lithuanian 3x3 Basketball Association founders.

The tournament is the first official basketball event in Lithuania since the start of lockdown and will be held in the seaside city of Palanga every weekend of July (3 stops and 1 Final with the top 8 teams).

This will be a chance for fans to watch some high-level 3x3 action. This tournament is a qualifier to the FIBA 3x3 World Tour, which is scheduled to come back later this year. All four events will be streamed live on the FIBA 3x3 YouTube channel.

Nine of the 10 first division Lithuanian basketball teams, including Rytas Vilnius, Neptunas Klaipeda, and Lietkabelis Panevezys will take part in the competition. They will be joined by three professional 3x3 basketball teams, led by Sakiai Gulbele, which is currently 6th in the FIBA 3x3 Team ranking and who won bronze at the FIBA 3x3 Europe Cup 2019 representing Lithuania. "The Lithuanian Basketball League is happy to be among the hosts of this tournament. I hope this year will be the start of an exciting long-term partnership," said Remigijus Milasius, President of the LKL.

The tournament is also endorsed by the Lithuanian Basketball Federation (LBBF), which has its eyes on the upcoming qualifications for the Tokyo Olympics.

"Top-level basketball players will have an opportunity to show off their skills in 3x3. Obviously, some will need to adjust to the different basketball format, but it only makes the tournament more interesting."

"Lithuania has a good chance to send two men’s basketball teams to Tokyo, thrilling both for the players and the country itself," added Mindaugas Spokas, LBBF Secretary General.

This tournament is the first of many on the road back to the return to play, a welcomed event for basketball fans around the world.