Back to 3x3: The Netherlands return to training 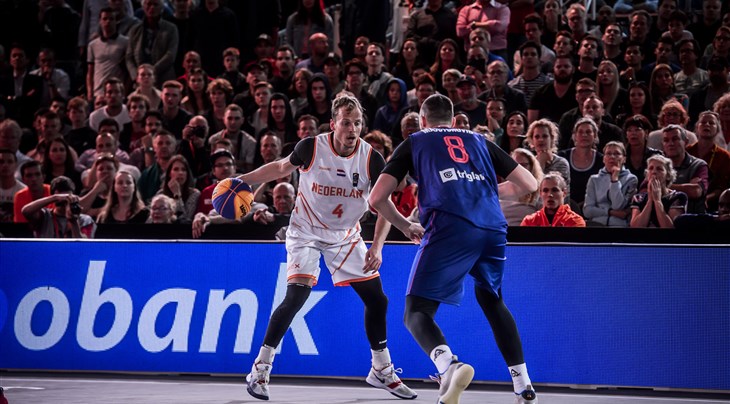 AMSTERDAM (Netherlands) - As countries begin to open up following the initial outbreak of the COVID-19 pandemic, players and coaches alike are returning to formal practice sessions. There still remain stringent policies in place to keep the health and safety of the players, including social distancing and a waiting period before certain contact drills are allowed.

Yoeri Pegel, the strength and conditioning coach for the Dutch 3x3 National Team, is leading the return to the courts, changing his programs to match the new way of training.

Once countries began shutting down a few months ago, Yoeri - who also works for football powerhouse Ajax Amsterdam - had to quickly change the routine and regiment of every player. "If athletes do not stay in peak shape… specific shape for basketball and 3x3, the injury tendency goes up."

Natalie van den Adel, a FIBA 3x3 Europe Cup medalist in 2018, was home in Spain, staying as active as she could. "It’s improvising a little bit. Whenever it wasn’t busy outside, I would go down to the basketball court by my house with a ball in my hands because it’s so easy to lose touch. Also, a lot of home workouts."

Until the 2020 Olympics were officially postponed, Pegel kept his players in top shape, even from a distance, with a very specific workout program. Once the circumstances changed, they were given some more time off to rest and recover. The veteran team stayed in shape the best shape they could until just a few days ago when they returned to the team facilities.

"The first thing is to let them touch a damn basketball. That’s what they miss, and you can’t blame them. We have to adhere to all the rules from the government … Six feet away and we couldn’t pass at first but now we can." For the players, the return to the court is welcomed. "I really missed it", said the number one men’s player in the Netherlands and FIBA 3x3 World Cup 2018 silver medalist, Dimeo van der Horst. “Now we’re back at it and even though we can’t play against one another, we’re still doing shooting drills and we still have the competitiveness that comes with it.”

With no 3x3 official competitions in the near future, the coach is keeping their new routines slow and steady. He knows aches and pains will be there, but that’s all part of the process.

"Give a 3x3 player all the freedom to do anything and they’re going to go hard." As they return to work, there are now tactical drills and plenty of distance between players and coaches. They are on a week by week basis, waiting for the government to update guidelines and adjusting accordingly.

Pegel believes this is a make or break time for a lot of players. He describes this return to action as a process-oriented task, and players that struggle with detail may lose their sharpness. On the contrary, for some players, this is the first real break they have experienced in years. This is a chance to refresh and return in their best possible shape. "It’s fantastic. I feel like I miss it more than they do," said Pegel. "I’m just happy to be back. I see a huge opportunity for these guys to get better. There’s just so much in front of them that you can do."

Van den Adel agrees. "It’s great, I love it. We now have so much time to work on our skills. Just to have a ball in your hands and be on an actual court instead of my backyard is great." "The Olympics begin a year away - that’s short. That year is going to fly by. All I want to see during one of those Olympic qualifiers is these guys crying because they did what they came there for. They made the Olympics."